SEOUL, Jan. 4 (Yonhap) -- A former executive of Kumho Asiana Group and a former employee of the nation's antitrust watchdog are under prosecution's probe for allegedly conspiring to delete documents unfavorable to the company, judicial sources said Monday.

According to the sources, the Seoul Central District Prosecutors Office has arrested a former employee of the Korea Fair Trade Commission (KFTC), surnamed Song, on the charge of receiving kickbacks, and a former executive of the nation's 20th-largest business group, surnamed Yoon, for allegedly giving kickbacks. They were both charged with destruction of evidence as well.

The former KFTC employee, who was tasked with digital forensic analysis of documents at the agency, is accused of taking millions of won in bribes from Yoon from 2014-18, and deleting some of KFTC documents that could work against Kumho Asiana. 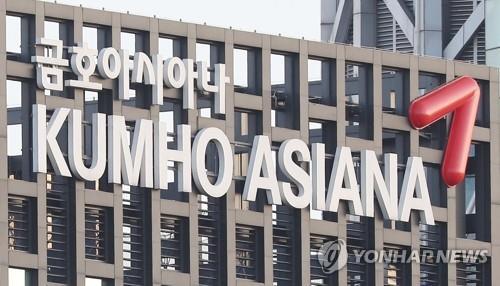 Yoon was reported to the prosecution by KFTC in August last year, alongside two of Kumho Asiana Group's affiliates -- Kumho Industrial Co. and Asiana Airlines -- and former Chairman Park Sam-koo, on charges of unfair intra-affiliate trading, which resulted in huge gains for its founder family. KFTC also imposed a 32 billion won (US$29 million) fine on the group.

In 2016, Asiana Airlines signed a 30-year contract with Gategroup Holding of Switzerland to provide in-flight meals on condition of Gategroup's investment in Kumho Buslines, according to the KFTC.

The prosecutors said they discovered signs of corruption related to Yoon and Song while investigating the allegations of unfair trade, and plan to expand the probe to figure out whether the group was behind the alleged wrongdoing.