The Islamic Republic might also intend to send a warning to South Korea and other U.S. allies that have followed U.S. sanctions and assert its maritime presence in the Strait of Hormuz, a strategically crucial waterway in the Middle East, they added.

On Monday, Iran's Islamic Revolution Guards Corps seized the tanker, MT Hankuk Chemi, in the Persian Gulf reportedly due to environmental pollution by the ship. It has been taken to an Iranian port for examinations, though the ship's operator denies it polluted waters.

The oil tanker, which was travelling from Saudi Arabia to the United Arab Emirates, was carrying 20 crewmembers -- 11 Myanmarese, five South Koreans, two Indonesians and two Vietnamese. 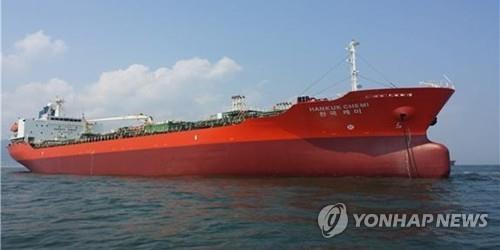 "For Iran, there could be a motive for the seizure, though facts related to what happened have yet to be clarified," Park Wong-gon, professor of international politics at Handong Global University, said.

"The assets frozen in Korea are obviously huge, particularly when Iran has been facing serious economic pressure due to sanctions. In other words, Iran appears to have a resolve to clarify its position regarding the assets," he added.

Iran's assets at two Korean bank accounts known to be worth around US$7 billion in total have been frozen since September 2019, when Washington's sanctions waiver for South Korea's imports of Iranian oil expired.

Due to the economic challenges caused by crippling sanctions and the fallout of the new coronavirus, Iran has been stepping up calls for Korea to unlock the frozen assets and pave the way for its purchase of essential items such as medicine.

With little progress in Iran's push to regain the assets, speculation emerged that Iran could even threaten to bring the case to the International Court of Justice in a procedure that could deal a serious blow to bilateral trade ties.

To address Tehran's frustration, South Korea has been trying to figure out a way to ramp up humanitarian trade with Iran without violating U.S. sanctions. But that effort floundered amid tensions between Washington and Tehran, particularly ahead of last year's U.S. presidential election.

"Due to hard cash shortages, Iran might have intended to poke South Korea and add pressure to move forward negotiations over the frozen assets," Nam Chang-hee, professor of diplomacy at Inha University, said.

"Stressing its longstanding history of exchanges with South Korea dating back to an ancient time, Tehran has hoped Seoul would look at it separately from its alliance partnership with Washington," he added.

Some observers presumed that the seizure might be intended to a certain extent to send a warning message against American allies that have joined U.S. sanctions to the detriment of its economic recovery, particularly reminding them that Iran holds significant control over the Strait of Hormuz.

Considering that Korea is a staunch American ally, analysts also raised speculation that the seizure could send some message to Washington at a time of high tensions between the U.S. and Iran.

The seizure coincided with growing anti-American sentiment in Iran as the Iranians marked the first anniversary of the death of a top general who was killed in a U.S. drone attack under the Trump administration.

Tensions also rose as Iran reportedly began enriching uranium up to 20 percent at an underground facility in a step that moved farther away from the landmark 2015 nuclear deal that the U.S. withdrew from in 2018.

The seizure came as a surprise as South Korea is seeking to send First Vice Foreign Minister Choi Jong-kun to Tehran to help address the frozen asset issue, according to a source. Seoul is still seeking a diplomatic solution for the release of the ship and its crew.

"We have been trying to figure out what happened through the Iranian Embassy in South Korea and the South Korean Embassy in Iran and continuing to make efforts to address this situation," Foreign Minister Kang told reporters.

On Tuesday, Koh Kyung-sok, director-general of the foreign ministry's African and Middle Eastern affairs, met with Iranian Ambassador Saeed Badamchi Shabestari and called for an early release of the ship.

Before the meeting, the ambassador told reporters that there is "nothing to worry" about in regards to the health of the sailors of the seized ship.

With the incoming U.S. administration of Joe Biden expected to rejoin the Iran nuclear deal and put Tehran back into compliance, a glimmer of hope emerged that Seoul's ties with Tehran could get better.

"When the Biden administration kicks in, dialogue with Iran could likely resume. Thus chances of the current situation between the two countries slipping into a crisis is not that high," Professor Park said.

"Iran is also well aware that the asset freeze is not because of South Korea's policy and that it does not need to provoke Korea further," he added.