(ATTN: ADDS photo, details from government meeting on the case in last 5 paras)
By Woo Jae-yeon

SEOUL, Jan. 5 (Yonhap) -- The horrific death of a 16-month-old allegedly abused by her adoptive parents has triggered an outpouring of grief nationwide and anger over many missed chances to save her.

The girl, named Jung-in, died at a hospital in western Seoul on Oct. 13, hours after she was taken to the hospital by her adoptive mother.

The National Forensic Service concluded that she died of severe abdominal injuries and internal bleeding that were caused by "strong external force applied on her back." Signs of prolonged abuse, such as fractured bones and bruises, were also found on her once-healthy body. 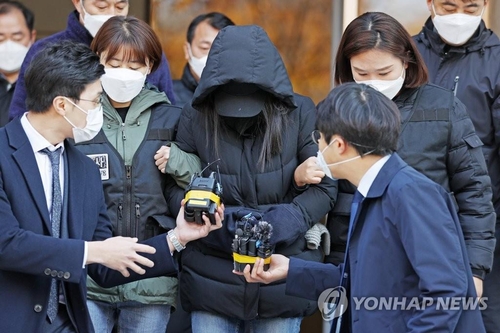 Jung-in's case has gained renewed national attention after SBS, a local broadcaster, aired an investigative report over the weekend to reveal the utter brutality of the abuse done to the toddler, and how child welfare agencies and police have squandered golden chances that could have saved her life.

The first red light was flagged in May by teachers at the day care center where she was attending, merely three months after she was adopted. Police closed the case, citing not enough evidence.

A month later, the second report came in from an acquaintance of the girl's adoptive parents, who found the toddler left alone in a car. The police came to the same conclusion.

The third -- and the last -- one was reported on Sept. 23 by a local pediatrician who found suspected signs of abuse and malnutrition of the girl. Once again, the police failed to step in to save her.

During the eight months from the adoption till her death, the suspected abuse took a devastating toll on her. The SBS program aired photos and videos shared by Jung-in's foster mother, who temporarily cared for the baby before she was adopted. In that footage, she was curious, giggly and full of life. In stark contrast, however, Jung-in became subdued, lifeless and gaunt in her adoptive parents' care. 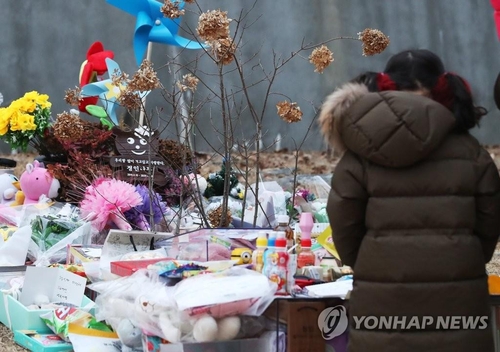 The girl's premature death has fueled a national reckoning over what many believed is a systemic failure to protect society's most vulnerable.

The public, celebrities and politicians are mourning the tragic loss by participating in the hashtag campaign, #sorryJungIn, aimed at raising awareness about child abuse. Hundreds of people have sent petitions to the Seoul Southern District Court, which is scheduled to hear the case on Jan. 13, to demand justice for the girl. A row of funeral wreaths made of white and yellow flowers has been laid alongside the wall of the court. One message said, "Sorry to notice too late, love you."

Prosecutors have requested three coroners to re-evaluate the cause of Jung-in's death to look into ways to seek a murder charge against Jang, a crime that recognizes an intention to kill and could carry a maximum sentence of life imprisonment or heavier. On the contrary, she could be put behind bars up to 10 years if convicted of the current charges.

Jang argued that the severe abdominal injuries were inflicted when she accidentally dropped the baby, a claim that the investigators found implausible. 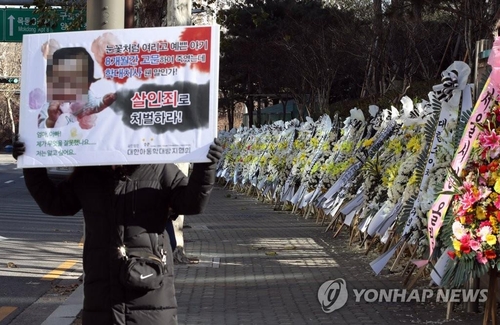 Dozens of petitions posted since last month on the Cheong Wa Dae website are calling for prosecutors to upgrade the charges against the mother.

Calling the case a "heinous murder," the most recent petition posted on Monday demanded a murder charge against Jang, greater investigative powers for child welfare officials and the forcible and immediate separation of children from suspected abusers.

To the disappointment and frustration of many, these all sound too familiar. Every time similarly heartbreaking cases have made headlines, lawmakers have been quick to promise an improvement of the social safety net for abused children but proven too slow to act. A slew of bills to better protect young children from abuse is sleeping in the National Assembly.

Many also vented anger and frustration that some of the police officers involved in the case were only given light punishments, such as warnings, for ignoring signs for help.

Meanwhile, child welfare activists call for overall improvement in the post-adoption care system and asked the government to play a more active role in ensuring the well-being and safety of adoptees.

In response, President Moon Jae-in on Monday ordered relevant state agencies to strengthen the management and oversight of adoption procedures and make children's interests the top priority in the process.

"Make all efforts to ensure that children are still taken good care of after adoption," Moon was quoted by his spokesman, Kang Min-seok, as saying. "This is very unfortunate, and what should not happen has happened," he added.

On Tuesday, the government said it would tighten the adoptive parent screening process, and mandate a review of a suspected child abuse case every half year.

Also discussed in the meeting, presided over by Prime Minister Chung Sye-kyun, were the creation of a permanent team dedicated to child abuse cases inside the National Police Agency, and a revision bill to allow police officers and social workers to have bigger investigative authority.

Pharmacists and foster parents will be added to the list of people who are obliged by law to report any suspected child abuse cases.

The government said it will expand child care facilities in time for a new measure to separate children from abusive parents who were reported more than twice, which is slated to take effect in March.

More detailed measures will be unveiled within next week, after close consultation with relevant agencies, the government said.