SEOUL, Jan. 5 (Yonhap) -- South Korea is forecast to come under the grip of the season's coldest weather later this week, with the morning lows dipping to minus 17 C in the greater Seoul area and minus 23 C in Chuncheon, 85 kilometers east of Seoul, the state-run weather agency said Tuesday.

The Korea Meteorological Administration (KMA) has issued a cold wave alert or advisory for Seoul and the central regions, warning that temperatures will be as low as around minus 20 C there between Thursday and Saturday. 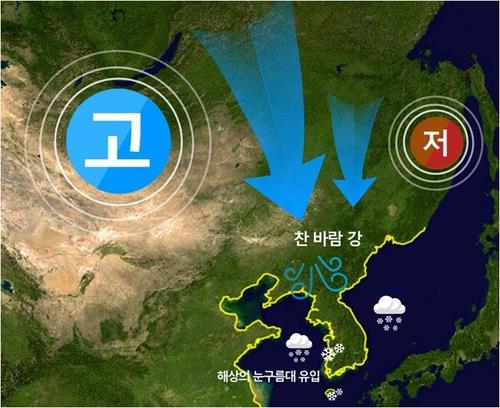 The KMA explained that the upcoming cold spell will be caused by a southward inflow of the cold air near Siberia, as a very slow movement of the atmospheric pressure between East Asia and the Bering Sea has disturbed the eastward movement of the Siberian cold air.

On Friday, morning lows will plummet to minus 17 C in Seoul and surrounding areas, minus 23 C in Chuncheon of Gangwon Province, minus 18 C in Sejong, minus 14 C in Jeonju of North Jeolla Province, minus 12 C in Busan and minus 1 C in Jeju on Jeju Island.

The weather agency forecast that snow will fall in Seoul and many other parts in the central regions and Jeju Island between Wednesday night and Thursday morning.

It also predicted as much as 30 centimeters of snow in the southwestern coastal areas and 50 cm of snow in Jeju's mountain areas until Sunday.

Temperatures will remain below the 30-year averages until next Tuesday and return back to the seasonal averages beginning next Wednesday, the KMA said.