The topic was first raised by Rep. Lee Nak-yon, head of the ruling Democratic Party, in an interview with Yonhap News Agency last week. The DP chairman said he will ask President Moon Jae-in "at an appropriate time" to grant pardons to the two former conservative presidents in order to promote national unity, stirring a huge backlash from the party's base supporters.

The Supreme Court's final ruling in Park's case is scheduled for Jan. 14. 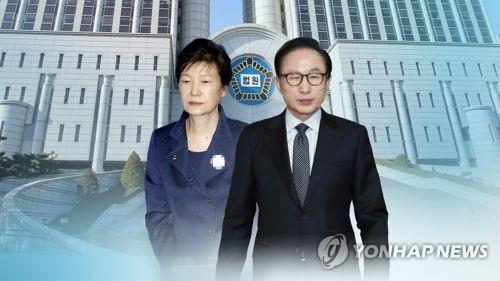 Opinions over the pardon debate were divided sharply according to party support. The poll showed that 88.8 percent of DP supporters were against the pardons, while 81.4 percent of those who supported the main opposition People Power Party were in favor.

By age, 68.1 percent of respondents aged 60 or older supported the idea, while those in their 50s were almost evenly split, with 48.2 percent in favor and 48 percent against the pardons.

The disapproval rate was relatively stronger among younger respondents. The proportion of those against the pardons in their 20s, 30s and 40s stood at 51.6 percent, 59.1 percent and 63.7 percent, respectively.

The survey, commissioned by a local news outlet OhmyNews, had a 95 percent confidence level and a margin of error of plus or minus 4.4 percentage points.