SEOUL, Jan. 6 (Yonhap) -- A U.S. reconnaissance plane flew over South Korea on Wednesday, an aviation tracker said, on an apparent mission to monitor North Korea as Pyongyang kicked off its rare party congress.

The U.S. Navy's EP-3E was seen flying over Hwaseong, south of Seoul, and Hongcheon, 100 kilometers east of the capital, in the afternoon, according to the tracker, No callsign.

The flight came as the ruling Workers' Party's first congress in nearly five years started in Pyongyang on Tuesday.

The congress draws keen attention from the outside world that the North could unveil its new policy line on the U.S. at the gathering amid stalled denuclearization talks.

Speculation persists that the North could undertake provocations or hold a military parade timed for the party congress expected to last for days.

U.S. Forces Korea Commander Gen. Robert Abrams said Tuesday there hasn't been any signs of a major provocation as of now. 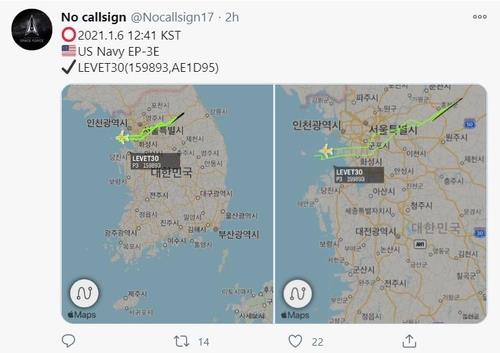