Oh, also a former lawmaker affiliated with the main opposition People Power Party (PPP), said he will run in the Seoul mayor election slated for April 7 unless Ahn Cheol-soo, another main mayor candidate, joins the party.

Ahn, head of the minor opposition People's Party, declared his Seoul mayoral bid last month, saying he wants to run as a "unified candidate" representing the whole opposition bloc. But he has not been positive about joining the PPP's race to pick a single standard bearer for the election. 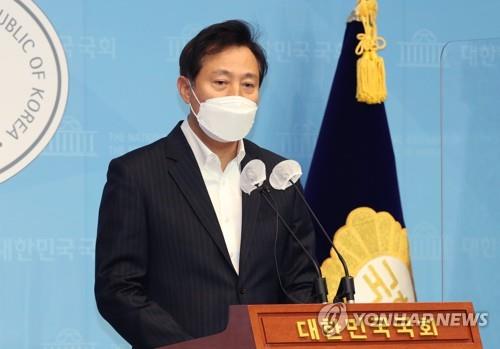 Oh demanded that Ahn join the PPP to establish a united front against the ruling party, adding that Ahn's refusal to do so would make his candidacy inevitable.

"If (Ahn) does not join the PPP or merge (his party with the PPP), I would have no other choice but to run in the by-election for Seoul mayor myself," Oh noted in a press conference at the National Assembly.

He said that including Ahn in the PPP's race to select its final Seoul mayor candidate would be a surefire way to eliminate the possibility of the opposition bloc's election defeat. It would also help keep the opposition bloc united in the run-up to the presidential election in 2022, Oh said.

Including the two, a group of high-profile politicians are likely to enter the contest the Seoul mayor post.

The Seoul mayor seat has been left vacant since the death of Park Won-soon in July. He was found dead on a mountain in Seoul in an apparent suicide after he was accused of sexually assaulting his former assistant.