Trading volume was very high at about 1.5 billion shares worth around 26.8 trillion won (US$24.6 billion), with gainers outnumbering losers 617 to 220.

The KOSPI sharply rebounded in the morning after taking a breather the previous session on profit-taking.

Analysts attributed the KOSPI's new record finish to foreign and institutional investors, who turned net buyers and broke their selling streak largely on the Democrats' control of the U.S. Senate. 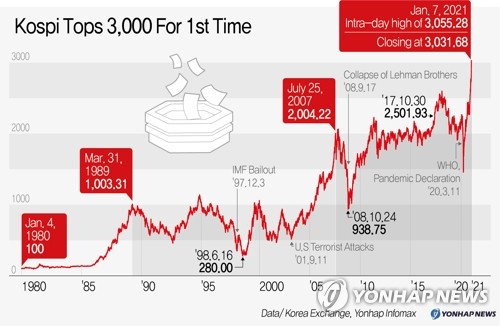 Stocks continued to gain ground amid expectations that the U.S. political paradigm shift would help increase spending to stimulate the world's largest economy and benefit its export-driven trade partners and financial industries.

"With growing expectations of additional stimulus plans in the U.S., robust foreign and institutional buying helped the KOSPI to remain above the 3,000-point plateau," Kiwoom Securities analyst Seo Sang-young said.

The local currency was trading at 1,087.3 won against the U.S. dollar, down 1.7 won from the previous session's close.

Bond prices, which move inversely to yields, closed mixed. The yield on three-year Treasurys rose 1.1 basis points to 0.964 percent, but the return on the benchmark five-year government bond slipped 0.1 basis point to 1.321 percent. 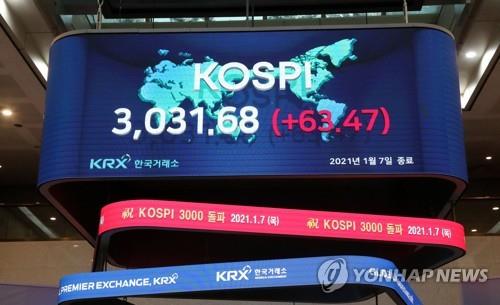