SEOUL, Jan. 7 (Yonhap) -- A police officer has been apprehended for robbing a jewelry store in the southwestern city of Gwangju, local police said Thursday.

The officer, identified only as Lim and a lieutenant belonging to the Gwangju Seobu Police Station, is accused of breaking into a jewelry store in southern Gwangju at around 4 a.m. on Dec. 18 and stealing precious metals worth 25 million won (US$23,000). Gwangju is located about 330 kilometers south of Seoul.

According to the Gwangju Nambu Police Station investigating the case, Lim appears to have committed the robbery after incurring gambling debts worth hundreds of millions of won. 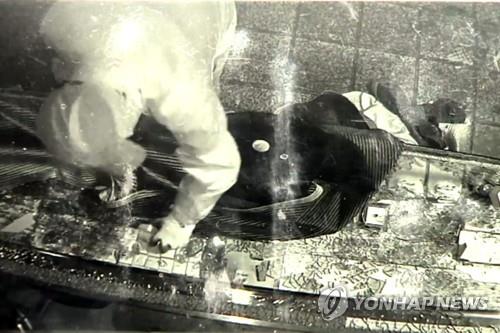 Lim confessed to the crime.

His colleagues said Lim appears to have sought to commit a perfect crime, as he wore a mask and hat during his intrusion into the shop and later drove around, with his license plate covered, in areas without surveillance cameras for hours to avoid being traced.

He showed up at his office the following day as if nothing had happened.

Police investigators initially had difficulties in tracking down the robbery suspect due to Lim's meticulous escape but eventually identified his vehicle after persistent pursuits, which included analysis of footage from security cameras installed on private homes.