SEOUL, Jan. 8 (Yonhap) -- Shares in Hyundai Motor Co. soared by nearly 20 percent on Friday as the South Korean carmaker is in talks with Apple Inc. for potential partnership in developing electric cars and batteries.

"We've been receiving requests for potential cooperation from various companies regarding development of autonomous EVs. No decisions have been made as discussions are in an early stage," Hyundai said in a statement.

In recent years, Apple reportedly has hired engineers with expertise in electric vehicles to develop a self-driving car system.

Industry people say it will take at least five to seven years for the Cupertino, California-based technology giant to launch a self-driving electric car as its development work is at an early stage. 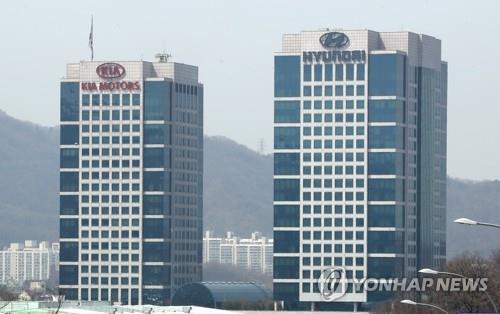 The possible business tie-up with Apple is in line with Hyundai Motor Group's drive to morph into a future mobility solutions provider.

Early this month, Hyundai Motor Group Chairman Chung Euisun said the group needs to be fully prepared to become the "first mover" in the rapidly changing automotive industry and that the group will make the year of 2021 a "turning point" that will determine its future growth.

He said Hyundai Motor will focus on securing a bigger share in environment-friendly vehicle markets and future mobility technologies to be a leading mobility company.

To strengthen its presence in the eco-friendly vehicle market, Hyundai Motor plans to launch the IONIQ 5, the first all-electric model based on its own EV platform called the electric-global modular platform (E-GMP), this year.

The maker of the Sonata sedan and the Palisade SUV plans to introduce the IONIQ 6 midsize sedan in 2022 and the IONIQ 7 large SUV in 2024. It will begin using alphanumeric names like its bigger rivals, such as BMW, whose models are named Series No. 1-8.

Hyundai Motor's independent Genesis brand also plans to launch an all-electric model this year and will eventually fill its lineup with zero-emission models in the future. 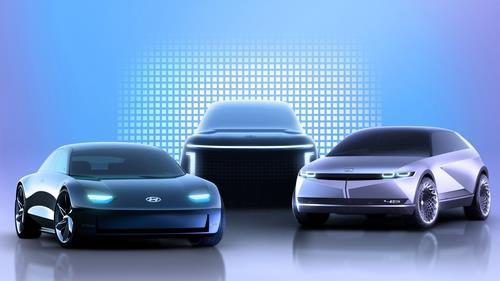 The group, which has Kia Motors Corp. under its wing, has set a goal of releasing 23 EV models, including 11 pure electric models, by 2025 to become the world's third-largest EV maker with sales of 1 million units.

Last month, Hyundai Motor said it will invest 60 trillion won (US$56 billion) by 2025 to strengthen its EV lineup and compete with its rivals, such as General Motors Co. and Volkswagen Group, and achieve a market share of 8 to 10 percent of the global EV market by 2040.

In other efforts to become a future mobility leader, Hyundai Motor plans to start applying Level 3 autonomous driving technologies to its models in 2022, while its affiliate Hyundai Mobis Co. continues to cooperate with global companies to develop Level 4 and Level 5 self-driving automation technology.

A Level 3 car, if fully developed, will allow lane changes and other autonomous driving functions to work without intervention by the driver. At Level 4, a vehicle can drive itself under limited conditions and will not operate if all required conditions are not satisfied. At Level 5, a vehicle's automated driving features can drive under any conditions.

The group said it will continue to expand partnerships with overseas companies with advanced mobility technologies for business synergies.