Trading volume was exceptionally high at about 1.3 billion shares worth some 40.2 trillion won (US$36.9 billion), with losers outnumbering gainers 463 to 375. 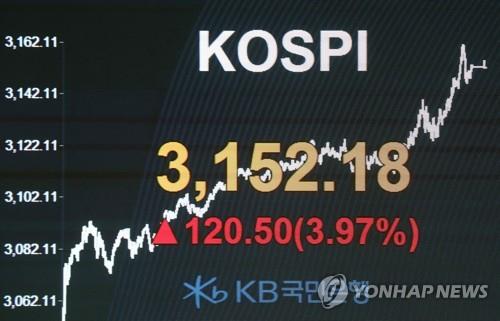 Samsung Electronics, the world's leading supplier of memory chips, surged 7.12 percent to a fresh record high of 88,800 won, largely on expectations of a global demand hike.

"We are expecting a turnaround in the memory chip market in the first quarter, considering the ongoing increase in demand," KTB Securities analyst Kim Yang-jae said.

The KOSPI got a further boost from a sharp rally in auto-related stocks, following reports that Hyundai Motor, the country's leading carmaker, is in talks with Apple Inc. for potential partnership in developing electric cars and batteries.

Most other top caps also joined the rally.

The local currency was trading at 1,089.8 won against the U.S. dollar, down 2.5 won from the previous session's close.

Bond prices, which move inversely to yields, closed lower. The yield on three-year Treasurys added 1.4 basis points to 0.978 percent, and the return on the benchmark five-year government bond rose 0.5 basis point to 1.326 percent.