SEOUL, Jan. 9 (Yonhap) -- The military has reported seven more cases of the new coronavirus, including six airmen from an Air Force unit near Seoul, the defense ministry said Saturday.

One Air Force member stationed at a unit in Gapyeong, 60 kilometers east of Seoul, was confirmed to have been infected after developing symptoms consistent with COVID-19, and around 170 members from the same unit have been undergoing tests, which have found five more positive cases so far, according to the ministry.

An Army soldier stationed in Incheon, west of Seoul, has also contracted the virus after coming into contact with a family member who tested positive earlier, the ministry added.

The latest cases brought the total number of COVID-19 patients among military members to 516.

Nationwide, the country added 641 more COVID-19 cases, including 596 local infections, raising the total caseload to 67,999, according to the Korea Disease Control and Prevention Agency (KDCA). 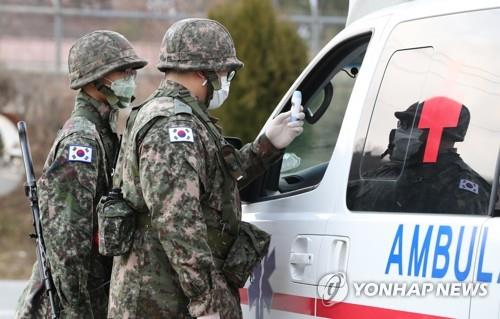