SEOUL, Jan. 11 (Yonhap) -- South Korea's new coronavirus cases rose by the smallest number in 41 days Monday apparently on the back of tightened social distancing measures and fewer tests over the weekend.

The country added 451 more COVID-19 cases, including 419 local infections, raising the total caseload to 69,114, according to the Korea Disease Control and Prevention Agency (KDCA). 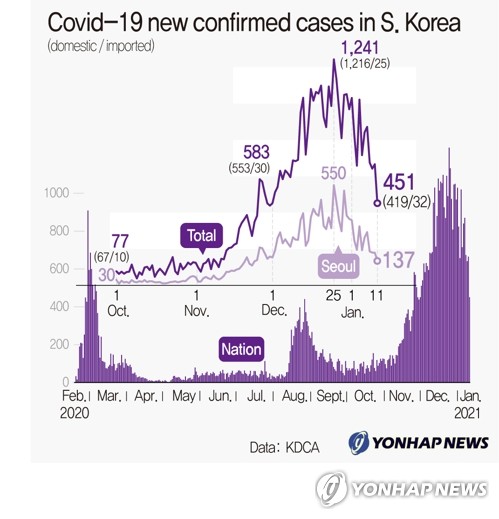 "The COVID-19 pandemic is on the path toward a slow downturn, yet dangers of cluster infections on the community level still persist," Jeong Eun-kyeong, KDCA chief, said.

Monday's daily caseload marks the first time since Dec. 1 that the daily figure stayed in the 400 range and also a sharp drop from 665 recorded on Sunday, 641 on Saturday and 674 on Friday.

Fewer tests are usually carried out during the weekend.

The number of daily cases stayed below 1,000 for the seventh consecutive day, the KDCA said.

An average of 693 daily new cases were reported across the country over the past week, staying in the 600 range for the first time since early December, the KDCA said.

The country has enforced the Level 2.5 social distancing scheme in the greater Seoul area, which is the second highest in the country's five-tier scheme, and Level 2 rules in other areas since Dec. 8. Health authorities extended the measures until Jan. 17.

Private gatherings of five or more people are banned across the nation during the extended period.

Restaurants and high-risk entertainment venues, including bars, clubs and karaoke establishments, in the Seoul metropolitan area will be allowed to conditionally reopen when the current Level 2.5 measures expire.

The authorities said they will decide whether to lower the level on the coming weekend.

Despite the downward trend, health officials have been vigilant against a new virus variant that was first reported in Britain.

The country has reported 16 variant cases. The authorities extended the ban on passenger flights departing from Britain until Jan. 21. 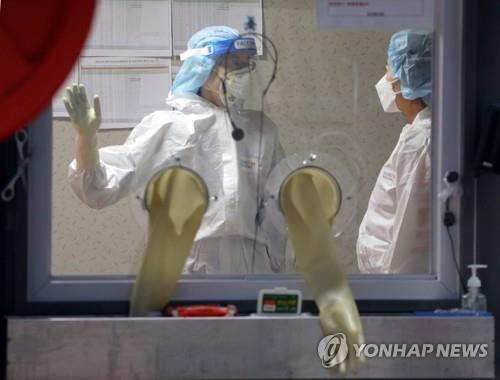 Of the locally transmitted cases, the capital city of Seoul accounted for 137 cases, and the surrounding Gyeonggi Province took up 142. Incheon, west of Seoul, had 18 new cases. The greater Seoul area accounts for around half of the nation's population.

Of the cluster infection cases, the Dongbu Detention Center in Seoul added three new cases bringing the total caseload to 1,196.

A nursing home in Seoul added five more patients, raising the caseload to 230. Another nursing home reported 10 new cases, with the total reaching 11.

Another nursing home in North Jeolla Province has found 96 patients, up 20 from the previous day.

Twenty infections were reported from a religious center in North Gyeongsang Province, bringing the total caseload to 42.

Among the confirmed cases, 32 were imported from abroad.

The number of seriously or critically ill COVID-19 patients came to 395, down six from a day earlier.

South Korea added 15 more deaths, raising the total to 1,140, according to the authorities.

The total number of people released from quarantine after making full recoveries was up 2,143 from the previous day to reach 52,552.