About US$7 billion Iranian assets have been frozen at two Korean bank accounts as the Donald Trump administration withdrew from a landmark nuclear deal with Iran in 2018 and tightened sanctions against the Islamic Republic. Iran has been urging Korea to let the country access the money.

Tehran reinforced the call for Seoul on Monday (Iran time) when its central bank chief met with Choi, according to Tasnim News Agency.

Abdolnaser Hemmati described the frozen assets as the "main challenge" with Seoul and pointed out that Seoul has made no progress even though his country raised the issue many times, including during his own visit to Seoul last year, the news outlet reported.

He also called South Korea's attitude toward the frozen assets "a big mistake" and "unacceptable" that it chose to freeze Iran's assets upon a third country order, according to the news report.

The central bank chief also stressed that Iran will take legal steps to use their assets here if the issue is not resolved.

On Monday, Choi is also expected to pay a courtesy call on Iran's Foreign Minister Mohammad Javad Zarif and meet other senior officials, at which he plans to reiterate his call for the release of the ship and sailors. 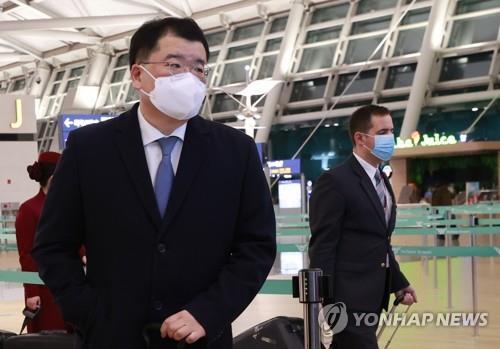