"(The government) will make sure that all of the people will be inoculated free of charge in accordance with priorities," he said in his New Year's address, assuring that inoculation will begin in February.

Having signed contracts with some foreign vaccine makers, South Korea expects the first-batch delivery of products within the coming weeks.

Moon also cited the ongoing process of reviewing the effectiveness and safety of a treatment developed by a South Korean firm and promised to make public all relevant procedures transparently.

"(The government) will continue to encourage South Korea's own vaccine development" as part of efforts for "vaccine sovereignty" and global health care cooperation, he added in the televised 26-minute speech. 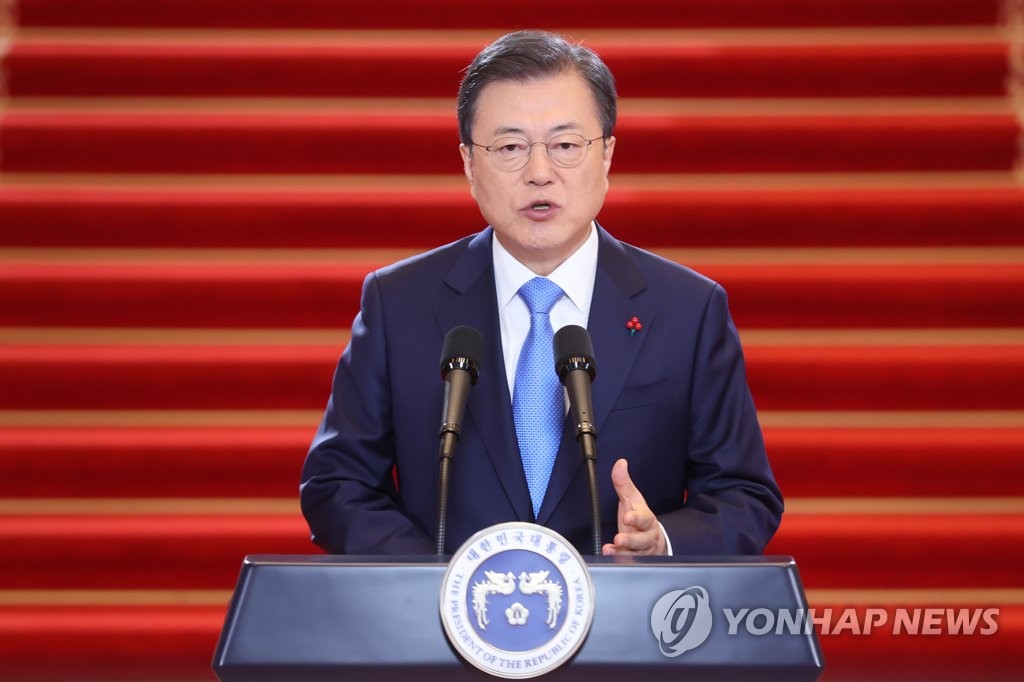 The end of a "dark tunnel" in the antivirus fight "is seen, at long last," the president said, adding that for South Korea, 2021 will be a year of "recovery" from the coronavirus crisis and a "leap" toward becoming a leading nation.

What's more important than any other thing is "inclusive recovery" to reduce social gaps and disparities, which have deepened because of the pandemic, he said.

In response to public criticism over soaring home prices, Moon apologized to those who suffer difficulties from the problem and pledged "swift and various" measures for the supply of new houses.

"Especially with a focus on expanding supply, (we) will swiftly map out various measures to have a quick effect," he said.

On diplomacy, he said the government will strengthen the Seoul-Washington alliance on the occasion of the upcoming launch of the Joe Biden administration.

Moon vowed to make a "last-ditch effort" to pull off a "great transition" in the stalled North Korea-U.S. and inter-Korean dialogue. He has less than 1 1/2 years in office.

"The key driving force of the peace process on the Korean Peninsula is dialogue and win-win cooperation," he stressed. "Our will to meet (with North Korea) anytime, anywhere, even in a non-face-to-face formula remains unchanged."

2021 marks the 30th anniversary of the two Koreas becoming members of the United Nations simultaneously, Moon pointed out.

The two sides should "join hands to prove that peace and prosperity on the Korean Peninsula are helpful to the international community as well," he said. "It's our duty to pass on a Korean Peninsula of peace without war and nuclear weapons to our descendants."

He expressed hope that both South and North Korea will participate in proposed regional initiatives on health care, which include dialogue among Northeast Asian nations and between South Korea and ASEAN member states.

Regarding the background of Moon's latest peace overture, his Cheong Wa Dae aides noted that the North's leader Kim Jong-un left the door open for inter-Korean dialogue in his message, issued at the Workers' Party congress under way in Pyongyang, despite repeated calls for bolstering its strategic weapons arsenal. 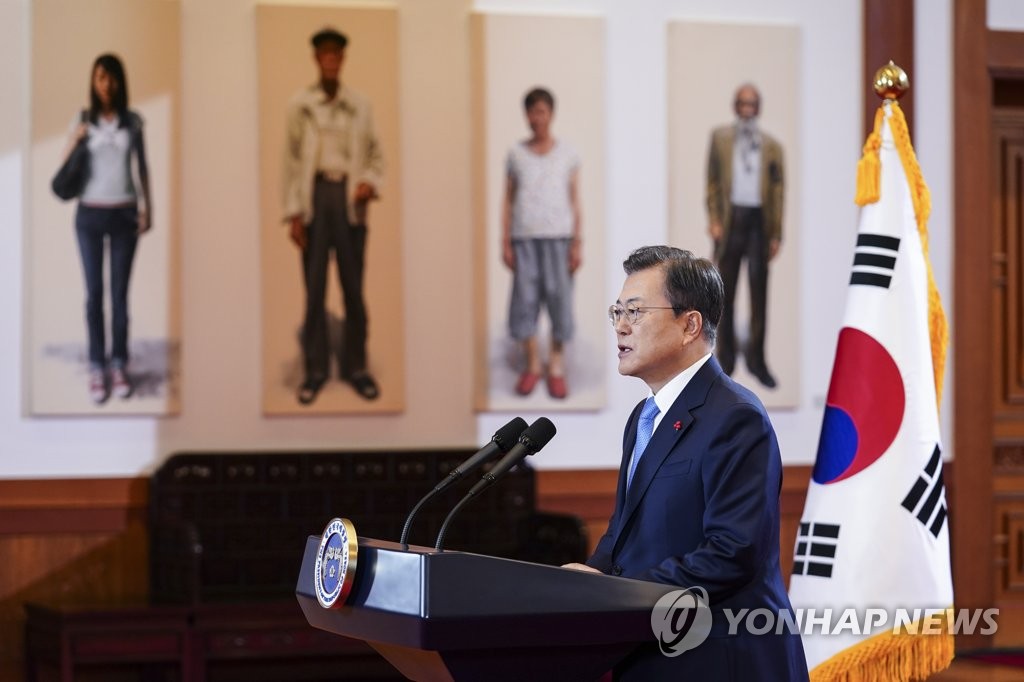 Moon announced that South Korea will also "actively consider" joining the Comprehensive and Progressive Agreement for Trans-Pacific Partnership (CPTPP), a 11-party free trade agreement in the Asia-Pacific region, while speeding up a push to forge free trade agreements (FTAs) with the Philippines, Cambodia and Uzbekistan.

In addition, the government will accelerate negotiations with China and Russia on the service-sector FTAs and trade talks with Latin American nations, he said in reference to Mercosur and the Pacific Alliance.

He briefly mentioned Japan, saying Seoul will keep striving for the "forward-looking development" of bilateral ties.

Moon, meanwhile, declared success in the "systemic reform" of powerful institutions, including the state prosecution service, and vowed close communication and cooperation for the new system to take root with stability.

"Reforming powerful institutions is to achieve checks and balances," he emphasized.

Moon's address came as his job approval ratings have notably dropped in recent months, apparently affected by the third wave of massive coronavirus infections, instability in the real estate market and controversies over his prosecution reform campaign. 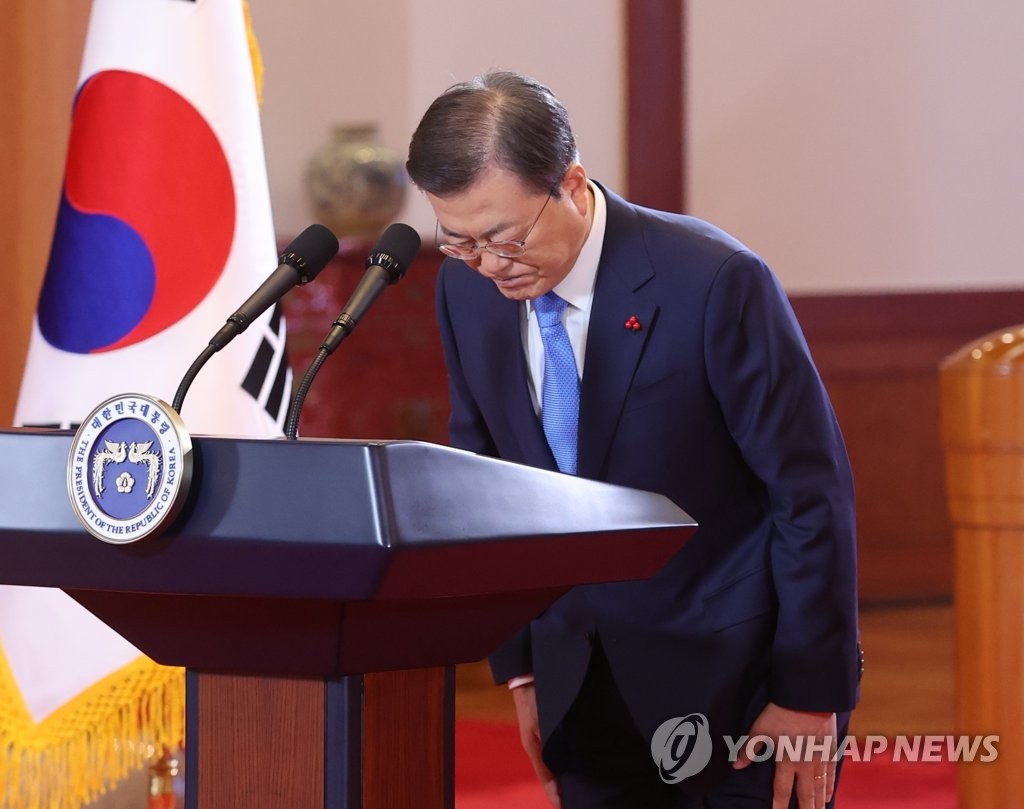 (2nd LD) Moon says all S. Koreans will be given free COVID-19 vaccines

(2nd LD) Moon says all S. Koreans will be given free COVID-19 vaccines