Trading volume was exceptionally high at about 1.7 billion shares worth some 44.1 trillion won (US$40.2 billion), with losers outnumbering gainers 712 to 170. 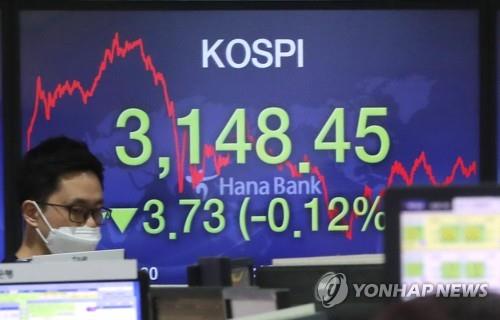 The KOSPI got off to a strong start on the back of stellar advances by Samsung Electronics and Hyundai Motor, as investors pinned rosy expectations on the top caps' possible partnership with U.S. tech giants.

Analysts attributed the fall to a massive selling spree by institutions, which raked in local stocks for the year-end dividends last year and are apparently seeking to cash in profits ahead of the option expiration day on Thursday.

"Since the ex-dividend day, they have been cashing in these assets, which affected the KOSPI's performance today," he added.

The local currency closed at 1,097.3 won against the U.S. dollar, down 7.5 won from the previous session's close.

Bond prices, which move inversely to yields, closed higher. The yield on three-year Treasurys lost 0.9 basis point to 0.969 percent, and the return on the benchmark five-year government bond fell 2.5 basis points to 1.301 percent.