SEOUL, Jan. 12 (Yonhap) -- The number of new coronavirus cases in South Korea remained in the 500 range on Tuesday, possibly indicating that the country's virus curve is flattening on the back of tightened social distancing measures.

The country added 537 more COVID-19 cases, including 508 local infections, raising the total caseload to 69,651, according to the Korea Disease Control and Prevention Agency (KDCA). 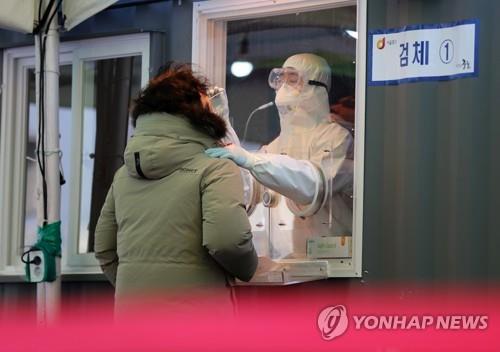 Tuesday's daily caseload is slightly up from 451 recorded a day earlier.

Monday's daily caseload marked the first time since Dec. 1 that the daily figure fell to the 400 range and also a sharp drop from 665 recorded on Sunday, 641 on Saturday and 674 on Friday.

A total of 5,413 new COVID-19 patients was reported between Jan. 3 and last Saturday, down from 6,686 reported during the same period a week earlier, the KDCA said.

The daily number of new cases has remained below the 1,000-mark this month except for two days, the KDCA said.

The country has enforced a Level 2.5 social distancing scheme, which is the second highest in the country's five-tier scheme, in the greater Seoul area and Level 2 rules in other areas since Dec. 8. Health authorities extended the measures until Sunday.

Private gatherings of five or more people are banned across the nation during the extended period.

Restaurants and high-risk entertainment venues, including bars, clubs and karaoke establishments, in the Seoul metropolitan area will be allowed to conditionally reopen when the current Level 2.5 measures expire.

Health authorities said the country has just entered the initial stage of a slowdown in the third wave of the pandemic that started early last month.

They further said they will gradually lift the ban on business at high-risk entertainment venues, as the country is at the critical stage of maintaining the current pace of the slowdown.

The authorities earlier said they will decide whether to lower or maintain the social distancing level Saturday.

Despite the downward trend, health officials have been vigilant against a new virus variant that was first reported in Britain and a continued rise in cluster infections.

The country has reported 16 variant cases. The authorities extended the ban on passenger flights departing from Britain until Jan. 21. 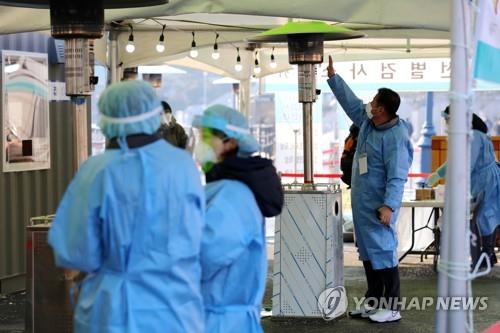 Of the locally transmitted cases, the capital city of Seoul accounted for 163 cases, and the surrounding Gyeonggi Province took up 163. Incheon, west of Seoul, had 20 new cases. The greater Seoul area accounts for around half of the nation's population.

By cluster infections, 20 more cases were reported from a church in Seoul's Gwanak Ward, bringing the total caseload to 21, KDCA said.

A detention center in eastern Seoul has reported a total of 1,238 patients since the first confirmed case on Nov. 27, KDCA said.

A total of 177 cases has been reported from a church in Yongin, 50 kilometers south of Seoul, the authorities said.

A total of 576 cases across the nation was linked to a missionary church in Sangju, 270 kilometers southeast of Seoul.

Among the confirmed cases, 29 were imported from abroad, slightly down from 32 a day earlier.

South Korea added 25 more deaths on Tuesday, raising the total to 1,165, according to the authorities.

The number of seriously or critically ill COVID-19 patients came to 390, down five from a day earlier.

The total number of people released from quarantine after making full recoveries was up 1,017 from the previous day to reach 53,569.