GYEONGJU, South Korea, Jan. 13 (Yonhap) -- An academic book on Park Dae-sung, a renowned artist who has contributed to the globalization of Korean traditional art, will be published in the United States later this year, a cultural foundation said Wednesday.

Six art historians in the U.S. -- including Suzie Kim, assistant professor of Asian art history at the University of Mary Washington -- will narrate Park's career and the general history of the development of Korean art in the upcoming book, according to the Gyeongju World Culture Expo.

Kim recently said during her visit to Korea that she took notice of the art master for leading the modern inheritance of traditional art with divergent and dynamic painting.

"His glamorous style of painting has enough capacity to be globally recognized," she noted.

The book is expected to be one of the few scholarly publications on the modern and contemporary art of Korea, introducing an overall summary of Korean traditional painting as well as comparative studies on the relations of arts in Korea, Japan and China. It will also be the first academic book on a living Korean traditional painter, according to Ryu-Hee-lim, the foundation's secretary-general. 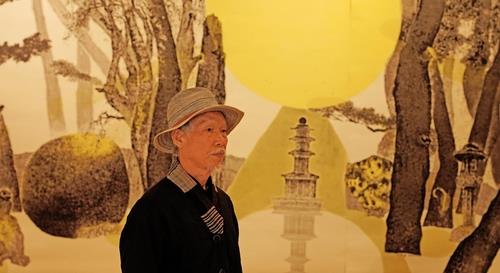 The book will be released later this year in line with a tour exhibition of Park's works across North America, the foundation said.

The exhibit will first be held at Los Angeles County Museum of Art from August through September and travel to Harvard University, Dartmouth University, Stony Brook University, University of Mary Washington and other venues until 2024.

The 76-year-old connoisseur, highly recognized for his landscape paintings, has created over 700 masterpieces and remains passionate about painting. His name became widely known after he won a major art contest for aspiring artists in 1979.

He also laid the foundation for Solgeo art museum in Gyeongju, about 370 kilometers southeast of Seoul, by donating 830 of his paintings in 2015.

The museum is currently hosting a special exhibition featuring Park's works, scheduled to run until June 20.

Book on Korean art master of traditional painting to be released in U.S. this year

Book on Korean art master of traditional painting to be released in U.S. this year