SEOUL, Jan. 13 (Yonhap) -- The government said Wednesday it will extend the mandatory quarantine period for incoming inmates by one week to three weeks as part of additional efforts to contain the spread of the coronavirus at correctional facilities.

The Central Disaster and Safety Countermeasure Headquarters announced a set of enhanced COVID-19 measures for prisons as an outbreak in a Seoul detention center has led to more than 1,200 infections since late November.

Under the new policy, new inmates will be required to undergo three-week isolation before entering correctional facilities.

They will receive a rapid antigen test before undergoing quarantine and then a polymerase chain reaction (PCR) test before being released from quarantine. Prison staff members as well as inmates are required to wear face masks and take PCR testing every week.

When coronavirus cases break out at correctional institutions, rapid response teams will be installed there and detect potential patients quickly through analyses of surveillance camera footage and epidemiological surveys. 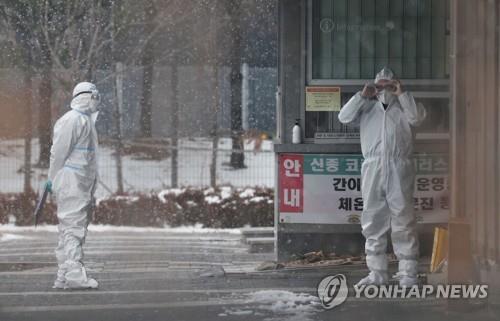 The latest measures followed the enhancement of social distancing guidelines for prisons early this year.

With 1,214 cases since Nov. 27, it became the second-largest infection cluster in the nation following a minor religious group responsible for an early surge of COVID-19 in March.

Among the newly confirmed patients, 11 tested positive after they were transferred to a prison in Yeongwol, around 200 kilometers east of Seoul.

The Dongbu center has been relocating its inmates to other regions to ease overcrowding and reduce infection risk.