SEOUL, Jan. 14 (Yonhap) -- U.S. President-elect Joe Biden's selection of a former diplomat for Asia policy signals his intention to reinforce cooperation among South Korea, Japan and other allies in the region under a closer-knit alliance network to keep an assertive China in check, analysts said Thursday.

The designation of Kurt Campbell, former assistant secretary of state for East Asia, came amid persistent historical animosity between Seoul and Tokyo and a sense that the U.S. alliances have slackened under the Donald Trump administration employing a transactional approach toward diplomacy under his "America First" mantra.

The spokesperson of Biden's transition team confirmed Wednesday that Campbell from the former Barack Obama administration will be the "coordinator for the Indo-Pacific" on the White House National Security Council, Reuters reported. 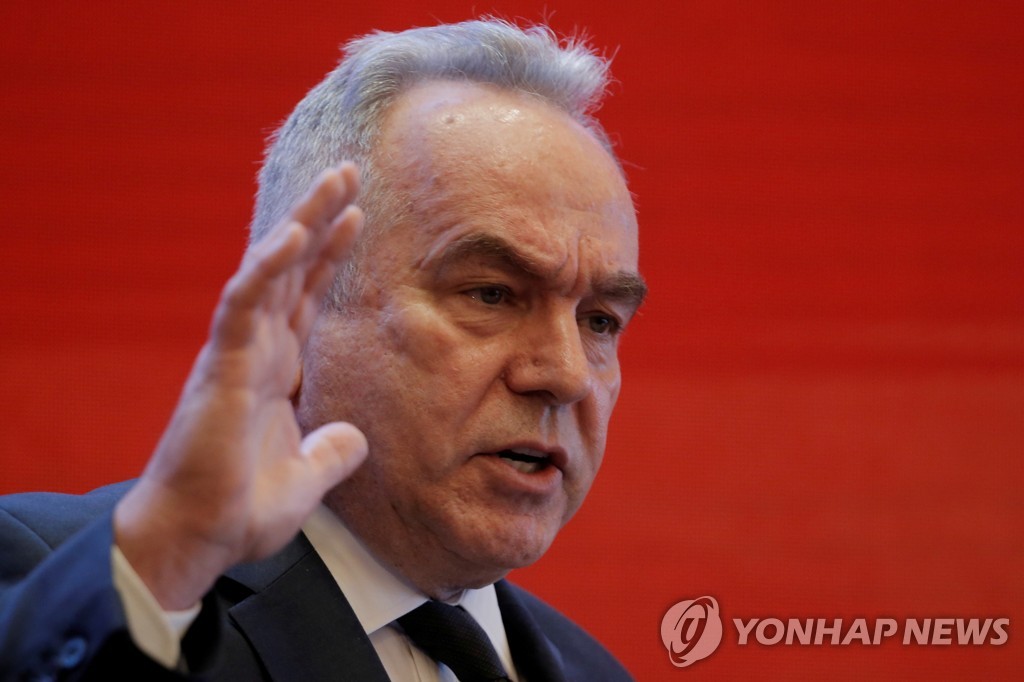 "The selection of Campbell apparently signals Biden's desire to restore a normal way of diplomacy toward Asia, and given that he is intent on strengthening the trilateral security partnership among South Korea, the U.S. and Japan, Biden's choice also insinuates an intention to actively engage in the Seoul-Tokyo relationship," Nam Chang-hee, a professor of diplomacy at Inha University, said.

"The U.S. position has long been that its trilateral cooperation with Seoul and Tokyo has not been optimized due to an unsatisfactory relationship between the allies. The return of Campbell might suggest he would work to bring them closer," he added.

Campbell is known as a key architect of the Obama-era "re-balancing" policy toward the Asia-Pacific, which was aimed at keeping an increasingly assertive China in check by strengthening regional alliances, its military presence and multilateral institutions on security and economic matters.

Under the initiative that came as the U.S. sought to wind down the protracted war in the Middle East, Washington tried to strengthen its alliances with South Korea, Japan and Australia, and partnerships with Singapore, Indonesia, Myanmar and others.

Washington also pushed to deepen collaboration among the countries anchored in the "hub-and-spokes" system of bilateral alliances to maintain what it called the rules-based order and global commons that it says China is undermining based on economic and military clout.

Along this policy line, Campbell, then a top Asia policy official, stewed over how to promote reconciliation between Seoul and Tokyo that have been mired in seemingly relentless spats over Japan's sexual slavery and forced labor during its 1910-45 colonization of the Korean Peninsula, observers said.

In a piece this month on the U.S. magazine Foreign Affairs, Campbell made clear his approach for alliance cooperation in checking China's assertiveness.

"Real regional balance, however, also requires action in concert with allies and partners," he said in the piece, entitled "How America Can Shore Up Asian Order: A Strategy for Restoring Balance and Legitimacy." He wrote it with Rush Dosh, director of the Brookings Institution's China Strategy Initiative

"The United States should encourage new military and intelligence partnerships between regional states, while still deepening those relationships in which the United States plays a major role -- placing a "tire" on the familiar regional alliance system with a U.S. hub and allied spokes," he added.

Restoring America's democratic alliances to shore up its global leadership and multilateralism on climate change and other fronts is expected to be a key tenet of Biden's foreign policy, given his stated campaign pledges.

In line with that, Seoul has been struggling to patch things up with Tokyo by sending top government and ruling party officials to Japan, such as National Intelligence Service chief Park Jie-won. But there are still no diplomatic solutions in sight.

Analysts voiced concerns that continued tensions between the two countries could put South Korea at a disadvantage when Japan has aligned its foreign policy with that of the U.S. to counter China's aggressive foreign policy approach.

"If South Korea continues to stay on bad terms with Japan, it, in the context of the trilateral partnership with the U.S. and Japan, would be placed at a disadvantage as Japan -- with no other choice to take -- would embrace a U.S.-centric foreign policy," Bong Young-shik, a research fellow at the Yonsei Institute for North Korean Studies, said.

"From the U.S. perspective, Japan could be the most trustworthy partner in Asia, while South Korea's trustworthiness could be seen as relatively lower in comparison with that of Japan," the scholar added.

In the Foreign Affairs piece, Campbell also called for "bespoke or ad hoc bodies" on individual problems to keep China in check and maintain the U.S-led regional order. He mentioned the D-10 -- a Britain-proposed group consisting of the Group of Seven democracies, Australia, India and South Korea.

"The purpose of these different coalitions -- and this broader strategy -- is to create balance in some cases, bolster consensus on important facets of the regional order in others, and send a message that there are risks to China's present course," he wrote.

"This task will be among the most challenging in the recent history of American statecraft," he added.

The selection of Campbell raised both hope and concern regarding the North Korean nuclear quandary, as he is known to be well versed in Korean Peninsula affairs but had served when diplomacy toward the North remained largely unfruitful amid North Korean provocations.