An association of cafe owners said the suit, which was lodged with the Seoul Central District Court, calls for around 1.8 billion won (US$1.64 million) in damages, or 5 million won for each of the 358 plaintiffs. 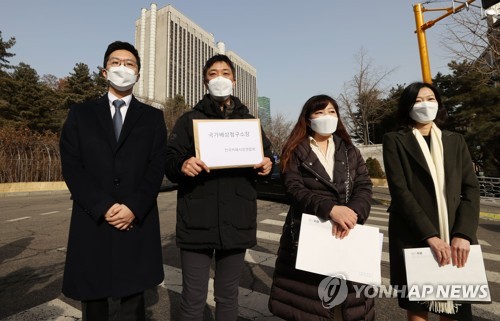 Member of a cafe owners' association hold a press conference outside the Seoul Central District Court on Jan. 14, 2021, before filing a damage suit against the government at the court. (Yonhap) 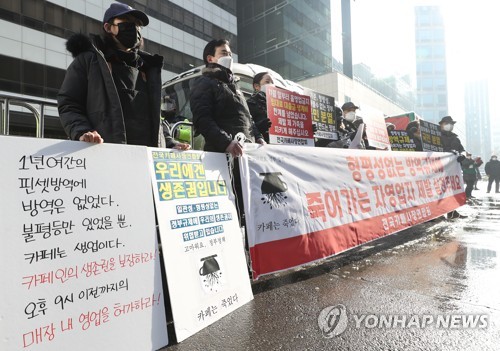 Member of a cafe owners' association demand the lifting of COVID-19 business restrictions during a rally outside the ruling Democratic Party's headquarters in Seoul on Jan. 13, 2021. (Yonhap)

"The inconsistent and unfair antivirus regulations have led us to resort to legal action," the association said in a statement during a press conference outside the court.

"Cafe owners couldn't help but cry out in the face of the ban on indoor services, which was enforced without any basis or data because food is the same (at restaurants allowed to operate), and could not bear to watch the livelihoods of staff being threatened any longer," it said.

The group claimed that some coffee shops have seen sales drop by 70-90 percent and struggled to pay rent for their establishments. 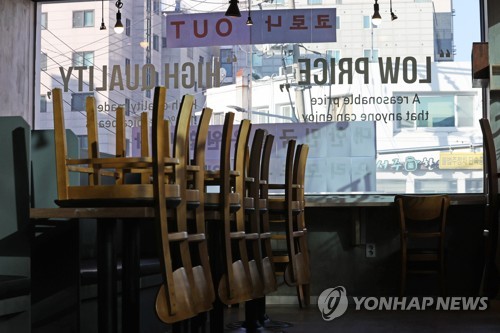 Chairs are turned upside down on tables inside a coffee shop in southern Seoul on Jan. 6, 2021, amid the government's COVID-19 restrictions on dining in at cafes. (Yonhap)

Cafes in the capital area have been banned from offering dine-in services since the government raised the social distancing scheme to Level 2 in late November.

In early December, the government raised the scheme further to Level 2.5 in the capital area and Level 2 in the rest of the country.

Coffee shop owners have been trying to survive on delivery and takeout alone.

"What we need now is disaster compensation, not disaster relief," the association said, warning that at least 100 more people have expressed an interest in filing additional suits against the government.

Small businesses have increasingly protested the government's COVID-19 restrictions, arguing they are unfair and unreasonable.

Restaurants, for example, have been allowed to operate normally until 9 p.m., after which they must switch to only takeout and delivery.

Gym owners have also filed similar lawsuits against the government. Last week, some of them reopened their facilities in defiance of the assembly ban.