The music video for her first solo single hit the milestone at around 5:19 a.m., some 26 months after its release in November 2018, according to YG Entertainment.

With the feat, Jennie has become the first South Korean solo female artist to have a 600 million-view music video on the global video-sharing website.

"Solo," a hip-hop number mixed with pop elements, swept iTunes charts in 40 countries and ranked No. 1 on its Worldwide Song Chart upon its release. It also topped major domestic charts.

Written by producer Teddy, who has been with the group since its debut, and co-composed by Teddy and 24, the song is about a girl who matures and declares her intention to live her own life after separating from her lover. 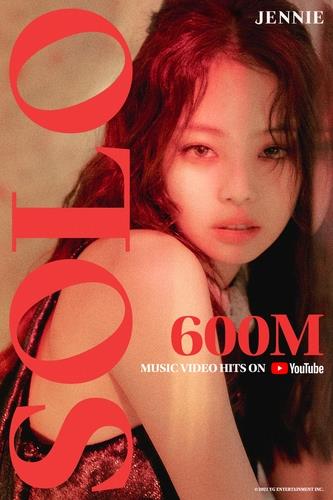 Following Jennie's solo release, two other members of the four-piece group -- Rose and Lisa -- are expected to also drop songs of their own.

Last month, YG Entertainment said the two members are preparing to film music videos for their solos, without further elaborating on the details.