(ATTN: UPDATES with request for court's leniency in last 3 paras)

SEOUL, Jan. 17 (Yonhap) -- An appellate court will give a verdict on Monday for Samsung heir Lee Jae-yong in a retrial of a bribery case involving former President Park Geun-hye.

Lee, vice chairman of Samsung Electronics Co., faces charges that he bribed Park and her longtime friend, Choi Soon-sil, to win government support for a smooth father-to-son transfer of managerial power at Samsung. Park was later impeached and ousted from presidency for corruption and abuse of power.

Prosecutors are seeking a nine-year prison term for Lee, who was charged with giving 29.8 billion won (US$27.4 million) worth of bribes and promising 21.3 billion won.

Lee's lawyers claim Lee was just a victim of Park's presidential power abuse and did not receive any special favors in return. 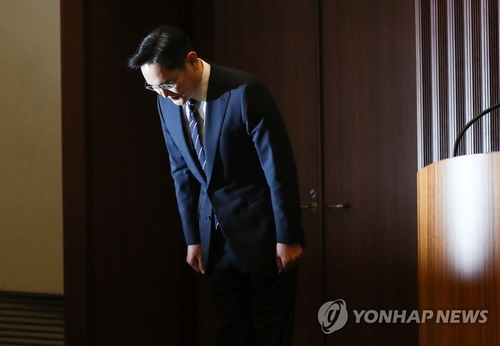 In 2017, Lee was sentenced to five years in prison for providing 7.2 billion won in support for Choi's daughter's equestrian training and a 1.6 billion-won donation to a sports foundation run by Choi's family. But he was freed the following year after an appeals court reduced the term to 2 1/2 years as well as the amount of his bribes.

In August 2019, however, the top court overturned the ruling and remanded the case to the appeals court for further proceedings. It said the 3.4 billion won used to purchase horses for Choi's daughter and the donation, 1.6 billion won in total, to the sports foundation should be considered bribes.

This increased to 8.6 billion won the total amount of bribes the top court believes Lee had offered.

Many say that Lee will not be able to avoid a prison term since the top court has already convicted him of bribery charges.

The convictions of both Park and Choi in receiving bribes from the country's conglomerates, including Samsung and Lotte, also cast a pall over Lee's legal battle.

On Thursday, the Supreme Court upheld a 20-year prison term for Park on bribery and power abuse charges. Choi was sentenced to 18 years in prison on charges including abuse of power, coercion and bribery in June.

At issue now is whether the court considers the running of an independent compliance committee as one of its key sentencing factors.

The committee was established in February to monitor the company's compliance with laws and ethics, after a court hearing on the bribery case in October 2019 ordered Lee to devise measures for preventing ethical lapses at Samsung.

Some say Lee may be able to receive a suspended prison term if the appeals court judge recognizes the effectiveness and sustainability of Samsung's compliance committee activities. 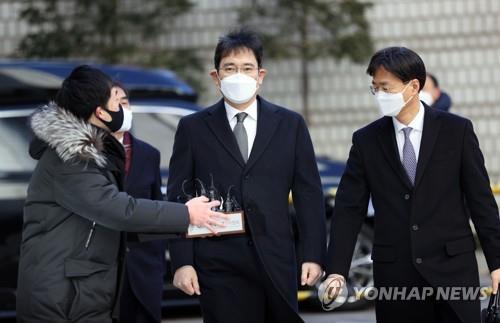 A day before the court's scheduled ruling, a business association asked the court for leniency on Lee's case.

"Given the role and significance Samsung assumes in our economy, Vice Chairman Lee should be given opportunities to fully execute his leadership in helping overcome the COVID-19 pandemic crisis facing the country and leading economic (growth)," Kim Ki-mun, chairman of the Federation of Small and Medium Business, said in a statement.

He also argued that Samsung, on its part, needs to improve its governing system to keep its owner in check and to enhance its role and investment in assisting economic growth.