SEOUL, Jan. 15 (Yonhap) -- South Korean skeleton slider Yun Sung-bin, the reigning Olympic champion in men's skeleton, has won a bronze medal in his first competition of the season amid the novel coronavirus pandemic.

Yun, who won gold at the 2018 PyeongChang Winter Olympics, marked a combined time of 2 minutes, 17.32 seconds after two heats to finish third at the International Bobsleigh & Skeleton Federation (IBSF) World Cup in St. Moritz in Switzerland on Friday.

Alexander Gassner of Germany won the event at 2:16.85, beating Martins Dukurs of Latvia by 0.01 second.

This was Yun's first competition in nearly 11 months. He was not able to race in IBSF World Cups from the beginning of the 2020/21 season as the South Korean national team decided to skip the events due to COVID-19 restrictions and financial reasons. 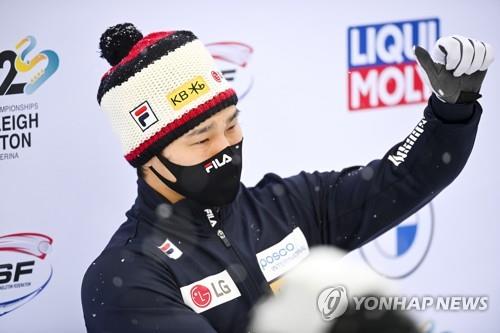 Yun was fifth after his first run at 1:08.61 despite having the quickest start among sliders. However, he moved up to third after clocking 1:08.71 in the second heat.

The 26-year-old will compete at the IBSF World Cup in Konigssee, Germany, the season's seventh World Cup event, on Jan. 22 to build up his form ahead of the 2022 Beijing Winter Games.

Yun is the first Asian to win a gold medal in sliding sports at a Winter Olympic Games.