SEOUL, Jan. 17 (Yonhap) -- New South Korean Ambassador to Japan Kang Chang-il on Sunday stressed his commitment to exploring "political" solutions to a set of historical conflicts between the two countries and fostering a "future-oriented" bilateral relationship.

Kang made the remarks in a virtual meeting with reporters before he officially takes office this week, amid renewed tensions between Seoul and Tokyo over a recent South Korean court ruling ordering the Japanese government to compensate victims of wartime sexual slavery.

The ruling earlier this month came amid concerns that an ongoing legal process to compensate victims of Japan's colonial-era forced labor could further strain bilateral ties when the two countries face shared challenges, such as North Korean military threats.

"As to historical conflicts, we need to put our heads together to discuss them and should explore political solutions," Kang said, casting the bilateral relations as the "worst" since Seoul and Tokyo normalized bilateral ties under a 1965 treaty.

"While doing that, we should push for a project to establish a future-oriented relationship to carve out a future of co-existence and co-prosperity," he added. 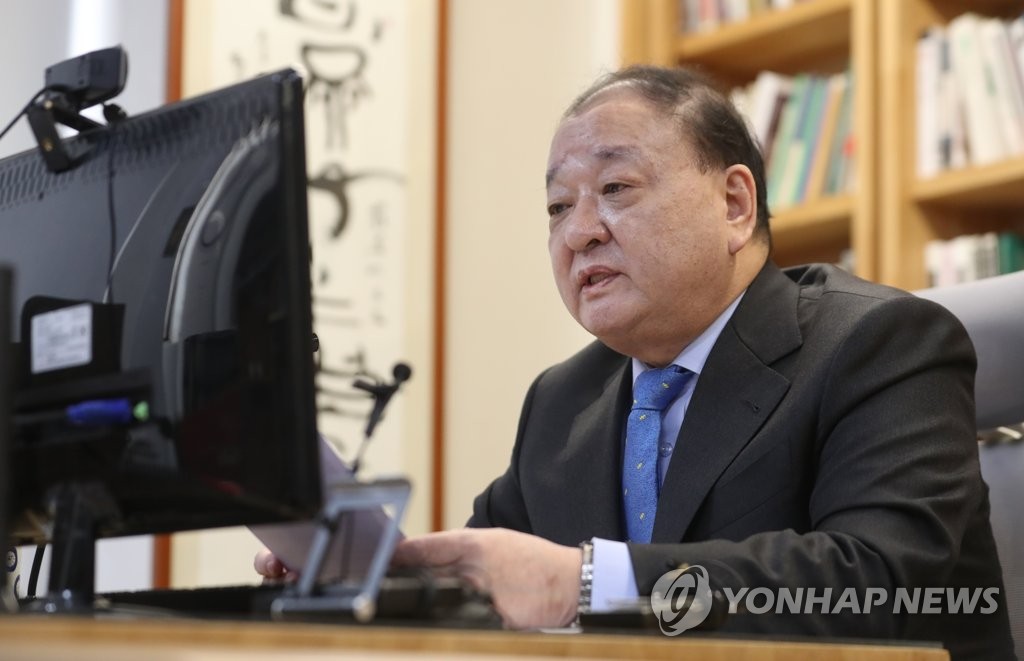 The pursuit of political or diplomatic solutions to the historical issues has made little progress, as Tokyo claims the wartime sexual slavery issue was settled under a 2015 bilateral deal whose credibility has been eroded as it did fully reflect views of the victims.

Japan also argues that forced labor and other issues stemming from its 1910-45 colonization of the Korean Peninsula were settled under the 1965 normalization treaty -- a claim based on which Japanese conservatives accuse South Korea of violating the treaty.

Kang underscored that President Moon Jae-in has a "strong will" to improve relations with Japan.

"The president called on me to strive hard to normalize South Korea-Japan relations and strengthen a system of bilateral cooperation," he said.

"(Moon) also said that he would play any role if it's needed for the successful hosting of the Tokyo Olympics, and he showed a will to meet with Prime Minister Suga for candid talks," he added.

Touching on rising tensions with Japan following this month's ruling on the sexual slavery issue, Kang stressed that the two countries should not repeat mistakes that they made in their past handling of historical disputes.

"Both South Korea and Japan have learned a lesson that amid the conflict over the forced labor issue, the historical issue being entangled with an economic issue was not helpful for both," he said, alluding to the forced labor row having escalated into a trade dispute sparked by Tokyo's apparent retaliatory export curbs.

Commenting on the speculation that Japan could bring the sexual slavery issue to the International Court of Justice, Kang refrained from offering personal comments, but mentioned the possibility of seeking mediation by a third country.

Efforts to move beyond historical animosity are all the more important, as the two countries should face common challenges, such as economic and security cooperation, the response to the COVID-19 pandemic and the successful hosting of the Tokyo Olympics slated for later this year, the ambassador said.

Kang also pointed to the need for joint efforts to strengthen the "triangular cooperation system" among South Korea, the United States and Japan -- a remark that could strike a chord with the incoming U.S. administration of Joe Biden, who seeks to reinforce regional alliances to shore up America's global leadership.

The ambassador expressed his anticipation that Biden will make "tremendous" efforts for reconciliation between Seoul and Tokyo, as Washington under the new president would pay keen attention to cementing the trilateral security partnership.

Meanwhile, outgoing Ambassador to Japan Nam Gwan-pyo failed to have a farewell meeting with Japanese Prime Minister Yoshihide Suga, in a break with diplomatic custom, before returning home on Saturday.

It marked a sharp contrast with Moon having met with outgoing Japanese Ambassador Koji Tomita and expressed hope for improved bilateral ties.

Some portrayed Nam's departure without a farewell meeting with the Japanese leader as a reflection of the tensions between the two countries and a diplomatic faux pas.