"I think now is not the (right) time to talk about pardons (for them)," he said, breaking his silence on the politically sensitive issue.

He was speaking during his unprecedented online New Year's press conference.

"The imprisonment of the two former presidents is a very unfortunate incident nationally," he said.

Moon noted, however, that the court trial procedures have just finished and national consensus is a prerequisite for any possible future discussions on the matter. 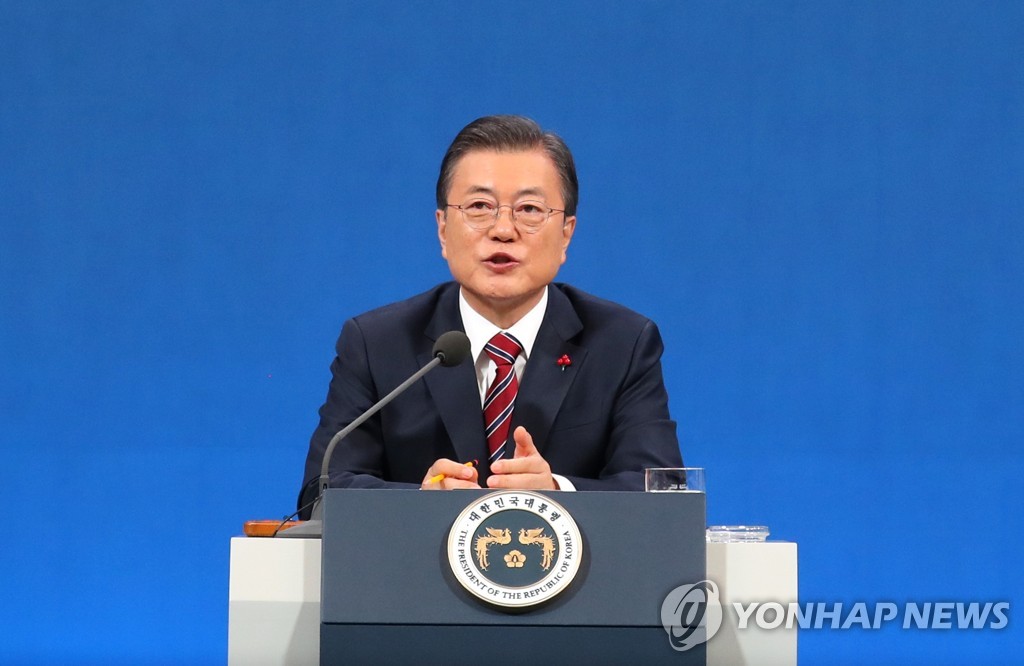 As corruption and other wrongdoing by the two have been confirmed to be true, "there has been enormous national damage, and the pain and wounds that the people have suffered are very big," Moon said.

Furthermore, he pointed out, the two are denying their past misconduct and refusing to accept the court rulings.

The move to give Park and Lee special pardons will not be accepted by the people's "common sense and I can't accept those either," Moon said.

Speculation has been rampant on the possibility of Moon considering granting amnesties to the former conservative presidents since he announced a plan to place a top policy priority in 2021 on "inclusive recovery" from the coronavirus crisis. The leader of the ruling Democratic Party, Lee Nak-yon, also told reporters he would ask the president to give them pardons to help promote national unity.

Moon said he was referring to the urgency of addressing the problem of widening social and economic gaps in the midst of the drawn-out COVID-19 crisis.

He dismissed the view that South Korea is lagging behind many other nations in the procurement of coronavirus vaccines.

He said inoculation will begin next month and that the first-phase vaccination program is expected to end by September.

The president assured the public of the safety of the vaccines to be introduced under contracts with foreign drug firms, saying local health authorities have prudently reviewed it.

He reaffirmed a decision to offer free-of-charge vaccine shots to all South Koreans in stages and pledged "adequate compensation" by the government for serious side or adverse effects from the scheduled shots.

Moon said it is too early to discuss another batch of emergency relief money handouts, which requires supplementary budgets and state bond issuance.

On growing concerns about rising housing prices, Moon said the government plans to expand housing supply on a scale "well beyond market expectation."

He admitted that his administration's efforts to stabilize the real estate market have not been successful. He cited bigger-than-expected demand due to the increase in the number of households, largely smaller ones.

The land ministry plans to provide details before long on a specific scheme to expand home supply especially in Seoul and nearby areas, according to Moon. 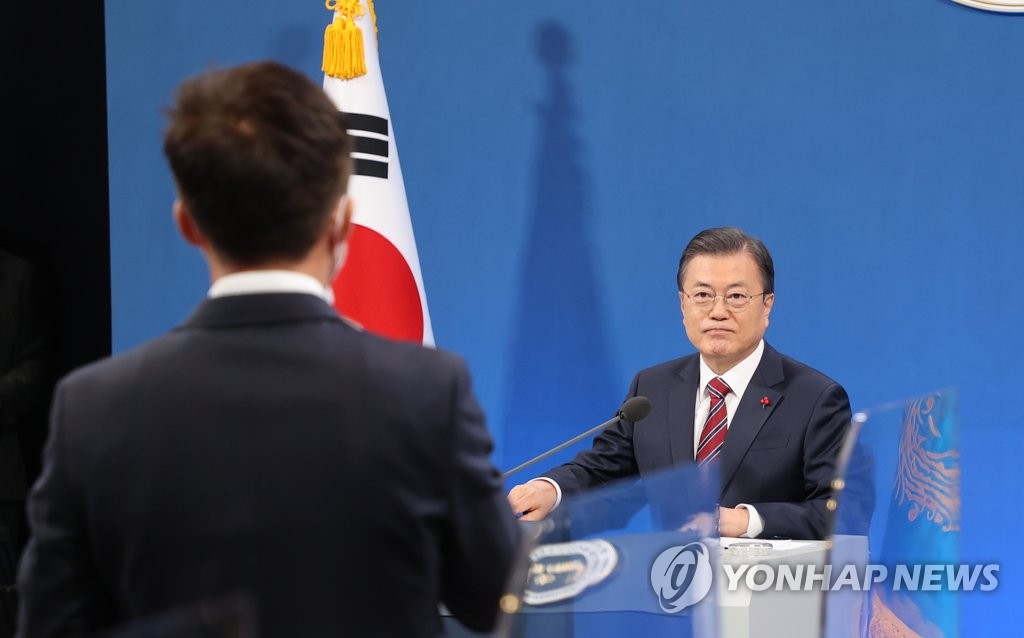 He also clarified his position on another politically fraught matter: disputes over the foiled attempt to take disciplinary action against Prosecutor General Yoon Seok-youl. Many of Moon's supporters regard Yoon as having violated his "political neutrality" obligation in a bid to block the president's drive to reform the prosecution service.

Yoon has not declared any intention in public to join the political circles, but multiple opinion polls show that he is the favorite to become a presidential candidate for the opposition bloc.

In a nutshell, Moon said, "I would like to say that he's a prosecutor general of the Moon Jae-in government. I don't think he's serving at the post with politics or a related plan in mind."

On North Korea, Moon said he believes the North's leader has the "will for peace, dialogue and denuclearization."

What North Korea wants is to win a "surefire security guarantee and normalize relations with the U.S.," he said.

Although the two Koreas have an agreement on Kim's reciprocal visit to the South, its time and format can be flexible, the president added.

"I don't think we need to stick to his reciprocal visit first. I am willing to meet him anytime and anywhere," Moon said.

The upcoming launch of the Joe Biden administration, which would not put the North Korea issue on the back burner, is expected to serve as a chance for a fresh start in both Pyongyang-Washington relations and inter-Korean ties, he said.

He proposed that the Biden team will inherit the 2018 Singapore summit deal signed between Donald Trump and the North's leader Kim Jong-un.

"The Singapore Declaration achieved under the Trump administration was a very important declaration in terms of denuclearization and establishing peace on the Korean Peninsula," he said.

He said he will seek early summit talks with Biden to ensure that the allies stay on the same page in the tumultuous peace process. 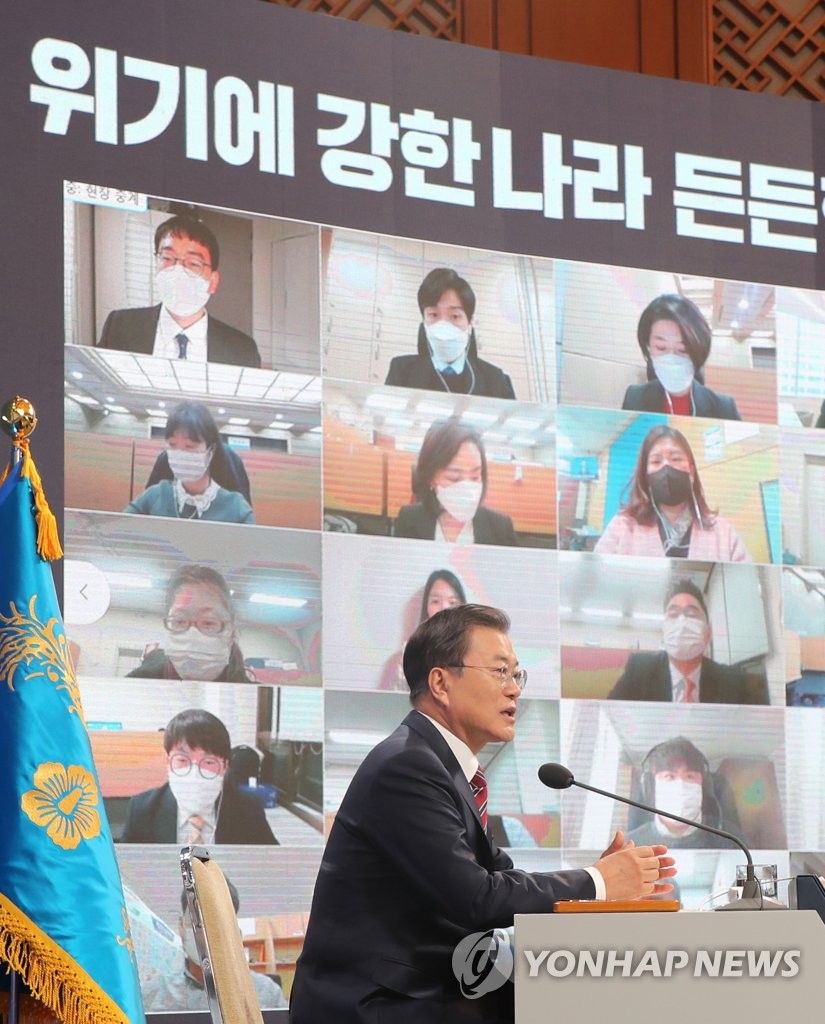 He then proposed that the two sides deal "separately" with such pending problems as bilateral export curbs in place, forced labor damages and compensation for those who served as sex slaves for Japanese troops during World War II.

He emphasized the importance of Seoul's relationship with Beijing and expressed hope that President Xi Jinping will travel to South Korea as soon as the coronavirus situation is brought under control. 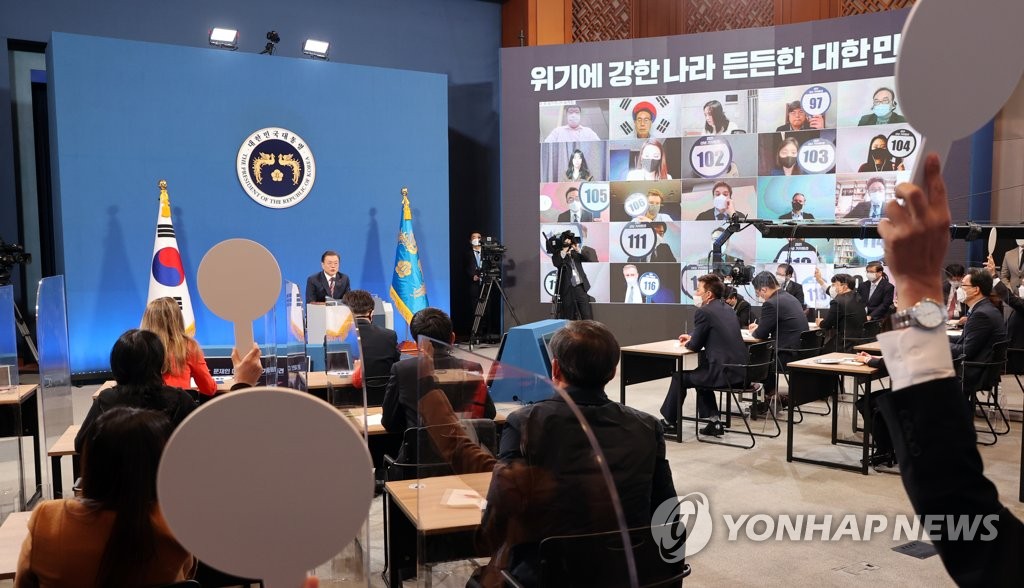