SEOUL, Jan. 18 (Yonhap) -- Over a third of non-regular workers have experienced unemployment since the new coronavirus broke out in South Korea in January 2020, a survey showed Monday.

According to a survey by Embrain Public conducted on 1,000 salaried workers aged between 19 and 55 on four occasions in April, June, September and December, the average rate of respondents who said they have lost their jobs stood at 17.2 percent in December, up 11.7 percentage points from April.

The rise was sharper among non-regular workers, going from 8.5 percent to 36.8 percent over the same period.

Regular workers were relatively less affected by the coronavirus pandemic, with the unemployment rate increasing to 4.2 percent, a mere uptick of 0.7 percentage point from April.

Among the reasons for unemployment, recommended job termination accounted for 29.7 percent, followed by involuntary layoffs with 27.9 percent.

And 77.3 percent of those who lost jobs since January said they have not received unemployment benefits. 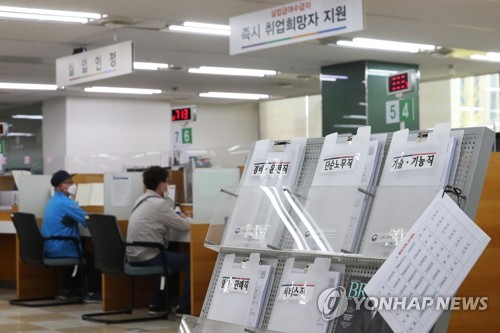 In this file photo, state unemployment benefit recipients get employment counseling at a state job placement center in central Seoul on April 13, 2020. (Yonhap)

Non-regular employees were also found to have a lower subscription rate to state employment insurance at 60.3 percent, whereas 94.7 percent of regular workers had signed up.

"Regardless of the condition of employment, all workers and small business owners whose incomes have shrunk (since the coronavirus outbreak) should be provided with disaster relief handouts that cover 70 percent of their original incomes until the pandemic comes to an end," said Kwon Du-seob, the head of Gabjil 119, a pro-labor civic organization.

The survey was commissioned by Gabjil 119 and the Public Workers Solidarity Foundation. 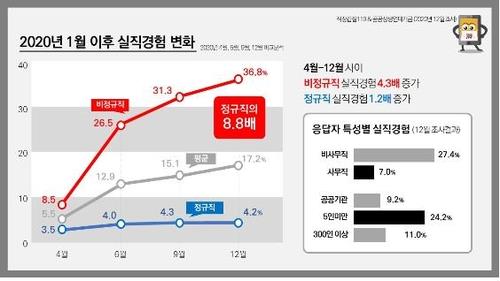 This image, provided by Gabjil 119, shows results of its recent survey, which revealed that 36.8 percent of private non-regular workers have experienced unemployment during the new coronavirus pandemic. The figure is 8.8 times higher than the unemployment rate among regular workers. (PHOTO NOT FOR SALE) (Yonhap)