SEOUL, Jan. 19 (Yonhap) -- Four military officers and one civilian worker of the Air Force have tested positive for the new coronavirus, the defense ministry said Tuesday.

Two Navy officers, one Air Force officer and the civilian worker, all stationed in the southern city of Sacheon, were confirmed to have been infected after undergoing tests following two earlier COVID-19 cases at their base, according to the ministry.

"We are administering tests for all members of the unit, and contact tracing is under way," a ministry official said.

The fifth case is another Navy officer in the eastern city of Donghae who tested positive following the infection of one of his family members, it added.

The latest cases brought the total number of virus cases among the military population to 539.

Currently, 423 service members are in isolation in accordance with health authorities' guidelines, and the military has quarantined an additional 3,960 people under stricter antivirus schemes of its own as a preventive step, according to the ministry.

Nationwide, the country added 386 more COVID-19 cases, including 351 domestic infections, raising the total caseload to 73,115, according to the Korea Disease Control and Prevention Agency (KDCA). 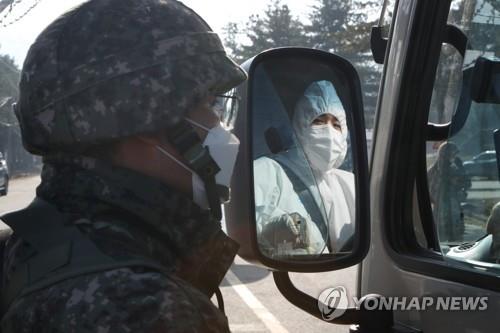 A service member checks a bus for quarantine work at an Army boot camp in the northern county of Yeoncheon on Nov. 26, 2020, after dozens of newly enlisted soldiers tested positive for the new coronavirus. (Yonhap)