Ministry spokesperson Boo Seung-chan made the remark a day after President Moon Jae-in said that the two Koreas can discuss joint military exercises between Seoul and Washington if necessary through a joint military committee as agreed upon in 2018.

"Our military can discuss any issues with North Korea through military talks, including the inter-Korean military joint committee meeting, to ease military tensions between the two Koreas," Boo said in a regular briefing.

"According to the Sept. 19 agreement, the two sides are supposed to discuss such issues as large-scale military exercises and arms buildup through the joint committee," he added. 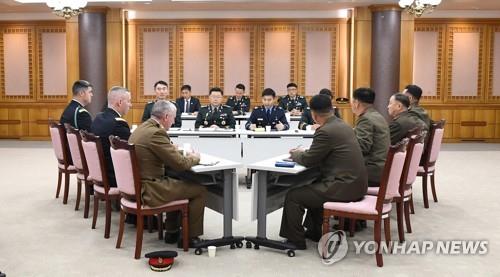 Under the pact named the Comprehensive Military Agreement (CMA), the two Koreas agreed to form a joint military consultation body to discuss and oversee the implementation of a set of tension-reducing measures. The pact was signed in 2018 during an inter-Korean summit held in Pyongyang.

But no discussions on the envisioned military committee have taken place amid a lack of progress in the denuclearization negotiations between the U.S. and North Korea and chilled inter-Korean ties.

Seoul and Washington have held combined military exercises on a regular basis, and the springtime one is supposed to be staged in around March.

North Korea has long demanded an end to such drills, and leader Kim Jong-un also repeated the call this month, citing it as a crucial matter to improve cross-border ties.

President Moon on Monday repeated the country's stance that they are defensive in nature.

The spokesperson also countered some criticism that the agreement has almost been nullified.

"Since the pact was signed, the two Koreas have not taken hostile acts against each other at the agreed-upon buffer zones, and the military situation in border areas has been managed in a stable manner," Boo said.

Under the pact, the two Koreas also agreed to set ground, air and maritime buffer zones near the border to reduce tensions and prevent accidental clashes.

Asked about inter-Korean military hotlines, the defense ministry said they have remained idle since June 2020, when North Korea vowed to sever all communication lines with the South in protest against Seoul's failure to stop defectors from sending anti-Pyongyang leaflets into the North. 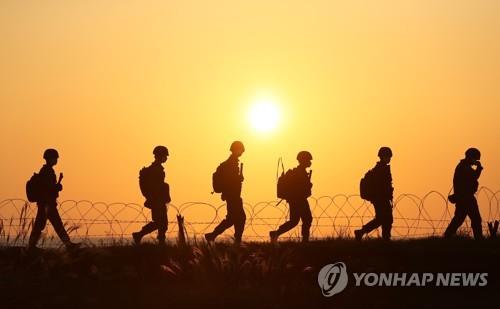