"Korea's corporate tax rates are significantly higher than many of its competitors, especially Singapore and Hong Kong," James Kim, chairman and CEO of the American Chamber of Commerce in South Korea, said in an online press conference.

In 2019, South Korea's corporate tax rates stood at 27.5 percent, compared with 16.5 percent in Hong Kong, 17 percent in Singapore and 25.9 percent in the United States, according to the Organization for Economic Cooperation and Development, a group of 36 mostly rich and advanced nations.

Kim also said foreign companies have difficulty in setting up long-term business plans in South Korea as regulations change very quickly, which does create challenges for companies to react in a timely way in Korea.

He went on to say that "the country's rigid labor laws compared to its regional competition impede the ability of foreign companies to hire Korean talent." 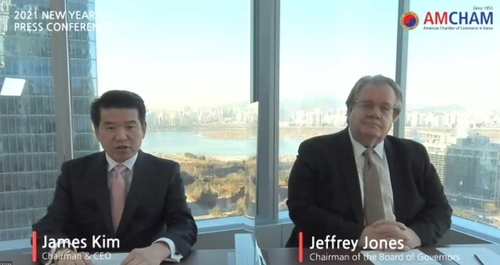 This photo, provided by AMCHAM and taken on Jan. 19, 2021, shows AMCHAM Chairman and CEO James Kim (L) and Jeffrey Jones, chairman of AMCHAM's Board of Governors, during an online press conference at AMCHAM's office at IFC Mall in Yeouido, Seoul. (PHOTO NOT FOR SALE) (Yonhap)

In 2021, AMCHAM said it will work to build a strong partnership between the Biden and Moon administrations, particularly in the digital and green business areas.

The U.S. business lobby group will collaborate with the Seoul government to establish Korea as the top destination for global companies' regional headquarters in Asia, the chairman said.

"To do this, Korea should follow the model of President Kim Dae Jung's administration, whose far-sighted reforms led Korea out of the 1997 Asian financial crisis as a more competitive and prosperous economy than ever before," he said without elaborating further.

The AMCHAM chairman called a Seoul court's decision against Samsung Group heir Lee Jae-yong "really disappointing," though the U.S. lobby understands the decision is in line with local laws.

On Monday, the Seoul High Court sentenced Lee to 30 months in prison over his involvement in a 2016 corruption scandal that ousted then President Park Geun-hye.

The court found him guilty of bribing Park to win government support for a 2015 merger between two Samsung affiliates that helped strengthen his control of the country's biggest conglomerate.

"In Korea, the personal liability and personal risk that CEOs go through is actually pretty unique in the global sense. We definitely need Samsung to continue being a global leader as a Korea-originated company," the chairman said.

Jeffrey Jones, chairman of AMCHAM's Board of Governors, did not expect the court's decision to have an impact on Samsung's businesses in the long term.