SMEs' overseas shipments totaled US$100.8 billion last year, down 0.2 percent from the previous year, according to the data from the Ministry of SMEs and Startups.

The decrease compared with a 6.7 percent decline in exports by middling and large companies. Smaller firms' exports accounted for 19.7 percent of South Korea's total overseas shipments, up from 18.6 percent a year earlier.

SMEs' exports grew 1.7 percent on-year in the first quarter of last year but tumbled 13.7 percent in the second quarter before expanding 3.6 percent and 7.9 percent in the third and fourth quarters, respectively. 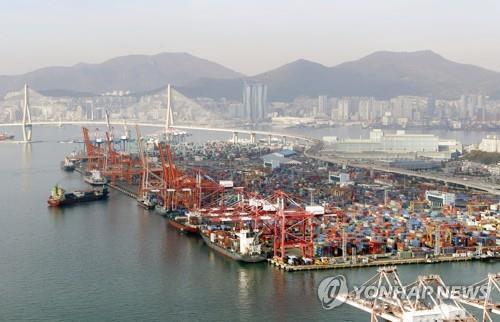 In particular, SMEs' overseas shipments hit a record high of $28.8 billion in the fourth quarter of last year.

The ministry ascribed their relatively good performance to a surge in exports of coronavirus test kits and online overseas shipments.

Their online exports stood at $730 million, up 106.3 percent from the previous year, which was far higher than the 46 percent increase recorded in 2019.

SMEs' exports edge down in 2020 despite pandemic

SMEs' exports edge down in 2020 despite pandemic