UIJEONGBU, South Korea, Jan. 19 (Yonhap) -- A man has been fined for breaking his quarantine for three hours to fix his mobile phone, a local court said Tuesday.

The Uijeongbu District Court, just north of Seoul, said it has sentenced the man, whose identity was withheld, to a fine of 2 million won (US$1,800) on charges of violating the Infectious Disease Control and Prevention Act.

The man was ordered to remain in self-isolation at his residence for two weeks after entering the country from the United States on June 30.

Under the law, all international travelers arriving in South Korea must remain under quarantine for 14 days before being allowed to travel freely.

But he was found to have left his residence for a nearby town to fix his mobile phone on July 13 of last year, just one day ahead of the end of his self-isolation period. The man was found to have roamed around for approximately three hours.

The man later tested negative for COVID-19, according to the court.

"The defendant's act was dangerous since it could have obstructed efforts to prevent and contain the infectious disease," the court ruled. 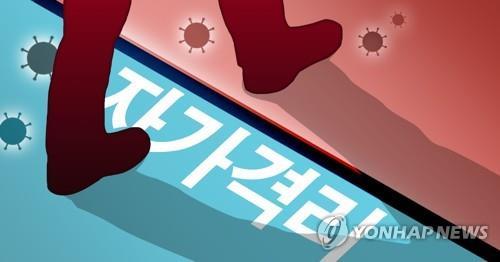 A graphic image depicting a violation of self-quarantine. (Yonhap)