Chung pledged to place top policy priority on turning 2021 into the "original year" of overcoming the pandemic and thanked the people for related cooperation so far.

"Today marks exactly one year since the first COVID-19 patient in the nation was reported. Public cooperation has always filled up the deficiencies in government measures," Chung said during an interagency meeting on coronavirus response held at the government complex in Seoul. Chung's office made public his opening remarks in a press release. 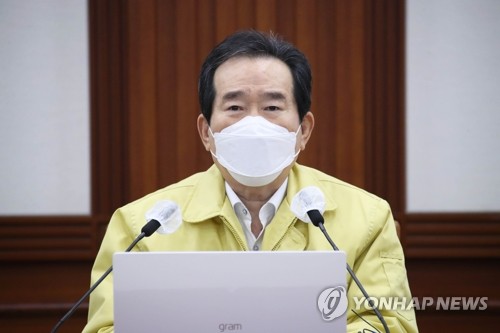 Prime Minister Chung Sye-kyun presides over a meeting of the Central Disaster and Safety Countermeasures Headquarters about measures against the spread of the new coronavirus at the government complex in Seoul on Jan. 20, 2021. (Yonhap)

Chung said the "biggest credit in the nation's battle against the pandemic goes to the public," lauding the people for uniting in the spirit of solidarity and cooperation in times of crises.

The nation has often been cited among the world's most successful countries in the battle against the pandemic.

The country went through two major waves of COVID-19 infections, with the first one centered in the southeastern city of Daegu in February followed by outbreaks in the greater Seoul area in August.

"Of the vaccine deal signed with the COVAX facility worth 10 million people, the preliminary shipments could arrive in early February," Chung said in a MBC radio interview earlier in the day.

COVAX has asked whether Seoul wants to receive the vaccines by then, to which authorities have agreed to do so, according to the prime minister.

The volume of the preliminary shipment is estimated to be worth inoculations of 50,000 people.

The government is fully preparing to receive the vaccines by then, with medical workers expected to be inoculated first, Chung added.