SEOUL, Jan. 20 (Yonhap) -- Records of juvenile delinquency should not stand in the way of a person's aspiration to pursue professional careers in the military, a state human rights watchdog said Wednesday.

The National Human Rights Commission of Korea (NHRCK) said the Marine Corps' disqualification of a non-commissioned officer (NCO) candidate due to his history of juvenile offenses violates his freedom of occupation and rights to equality.

The NHRCK expressed such an opinion in response to a petition from an applicant for last year's Marine Corps NCO selection test who was rejected in the final screening after passing the written test, physical examination, personality test and interview evaluations. 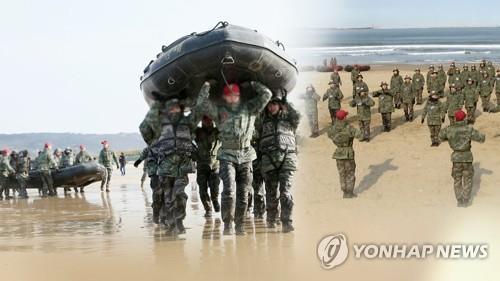 The petitioner claimed that he was rejected due to his record of juvenile protective disposition, a legal term referring to the transfer of young persons guilty of minor crimes to a juvenile reformatory.

His claim has been confirmed to be true in an investigation by the human rights watchdog, which said six other applicants for the same NCO selection test were also disqualified for juvenile offenses.

The Marine Corps commander explained to the NHRCK that the NCO selection test was conducted based on the Military Service Act, which stipulates the appointment of officers and NCOs from among those with sound thoughts and decent conduct.

"The military law is meant to call for careful selections of military officers who are responsible for the lives of numerous subordinates during wartime and peacetime," the commander said.

But the NHRCK said it is questionable whether the juvenile protective disposition of people wanting to become professional soldiers can be viewed as a measure to ensure their loyalty and integrity.

The watchdog also said such a disadvantage by the military runs counter to the purpose of the Juvenile Act, which stipulates the protective disposition does not have any effect on the young person's future status.

It then asked the defense and justice ministries to take countermeasures to prevent the recurrence of similar incidents in the military.