SEOUL, Jan. 20 (Yonhap) -- Chung Eui-yong, President Moon Jae-in's pick for foreign minister, is known for his role as national security adviser in spearheading Moon's engagement policy for North Korea that led to the first-ever summit between the United States and North Korea.

Chung's nomination, announced just ahead of the inauguration of U.S. President-elect Joe Biden, is seen as reflecting Moon's will to revive his peace drive and help resume the nuclear diplomacy between Washington and Pyongyang in his remaining time in office.

"I think it's my last chance to serve the country. I take this nomination as a candidate for public office with a humble and solemn heart," Chung said in a message sent to media following the announcement.

"If confirmed, I will do my utmost so that the foreign policy pursued by the Moon Jae-in government can bear fruit and the Korean Peninsula peace process can take root," he said.

Moon said in a press event on Monday that he hopes the stalled nuclear dialogue with North Korea will pick up from the Singapore Declaration, referring to the agreement from the first summit between North Korean leader Kim Jong-un and U.S. President Donald Trump in June 2018.

Chung, 74, started off his early career as a diplomat by entering the foreign service in 1972. He built his career with extensive experience in multilateral diplomacy and U.S. affairs, having served in various domestic and overseas positions, including those in the U.S., Canada, Israel and Thailand.

During his time at the foreign ministry, he also worked at the trade affairs and intelligence analysis departments.

Chung also worked as head of the International Labor Organization council before he entered politics by winning a parliamentary seat in 2004.

After Moon became president, Chung served as the chief of the presidential National Security Office from 2017 until July last year. He has been working since as a special aide to the president for foreign policy and security affairs.

Chung, a Seoul native, graduated from Seoul National University with a degree in diplomacy. 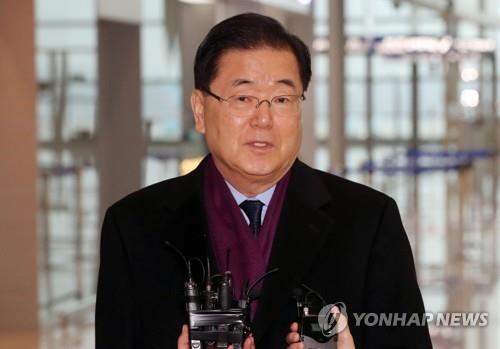