SEOUL, Jan. 20 (Yonhap) -- North Korea appears to be "many, many years" away from developing a nuclear-powered submarine loaded with a ballistic missile, a U.S. rocket expert said Wednesday, after leader Kim Jong-un unveiled the ambitious goal last week.

In a forum on the North's recent ruling party congress, Michael Elleman of the International Institute for Strategic Studies also raised concerns over Pyongyang's push for unmanned striking capabilities, referencing 2019 drone attacks on Saudi oil facilities, which the United States blamed on Iran.

During the eighth congress of the Workers' Party earlier this month, the North showed its intent to keep advancing its nuclear capabilities and claimed that the study on the designing of a new nuclear-fueled submarine was "in the stage of final examination."

"These are very complex projects that take many, many years if not decades to create," Elleman said during the virtual forum hosted by the think tanks Sejong Institute and Stimson Center.

"If you look at the history of China's nuclear-powered submarine program and the missile that went into it, it extended over two to three decades and suffered many failures. I think this is more aspirational than anything else at this point," he added.

The expert noted that to have submarine-launched missile capability, the North needs to have at least three submarines to have a "constant patrol."

"So, I see this submarine-launched system is more of a longer-term goal, not something that's already been accomplished," he said.

The North's pursuit of a submarine equipped with a nuclear-tipped missile has been a source of a major concern for Seoul and Washington, as the North can use the underwater platform for a stealthy retaliatory strike even after surviving a preemptive attack -- so as to strengthen what it calls "nuclear war deterrent."

Elleman also pointed to the North's pursuit of drone capabilities and stressed the need for measures to counter the security challenge.

"We've seen what Iran has been able to do with its drones, precision guided drones. We saw what they did to Abqaiq facilities in Saudi Arabia ... take out some very expensive infrastructure and do it quite easily," he said.

"We all need to be thinking about how you want to counter it because you can't be sending $10 million interceptor missile after drones that cost a few thousand dollars. It is not a sustainable thing," he added.

Fears about potential unmanned attacks have lingered for years since South Korean military authorities discovered crashed North Korean drones in border areas, including the front-line island of Baengnyeong in 2014.

"It is highly unlikely to fulfill. I think it is like a mission impossible. (North Korean leader) Kim Jong-un is not Tom Cruise," he said during the forum, stressing even Kim's two late predecessors -- grandfather Kim Il-sung and father Kim Jong-il -- had never achieved the objective.

"It became much more difficult to fulfill this task in Kim Jong-un's era because the economy is involved more heavily in foreign trade and foreign currency earnings," he added. 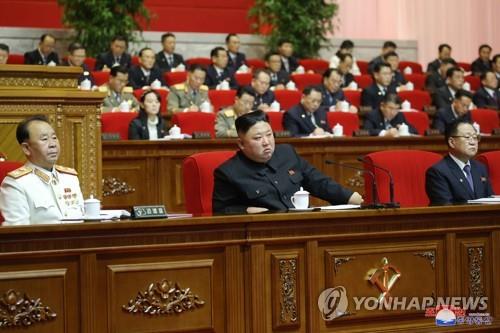