"The possibility has opened for us to secure additional vaccines for 20 million people, in addition to the already secured volume for 56 million, amid the pursuit of a deal between Novavax and SK Bioscience Co. recently," Moon said during the tour of SK's coronavirus vaccine production facility in Andong, North Gyeongsang Province, 270 kilometers southeast of Seoul.

Moon made the on-site inspection to encourage workers to produce high quality and safe vaccines on the first anniversary of the COVID-19 outbreak in the country, according to Cheong Wa Dae. It came as the government was in full preparations to begin public inoculations for COVID-19 next month, beginning with medical workers. 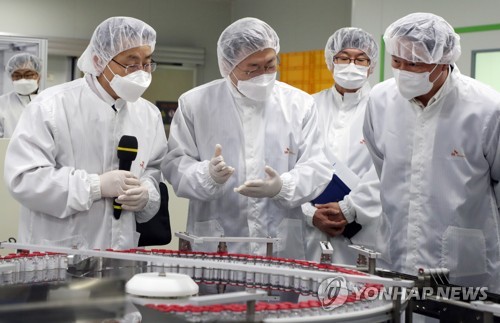 In addition to the already secured volume for 56 million people, Seoul has been eyeing the purchase of additional vaccines from Novavax through a potential deal between the U.S. company and SK. The initially reported volume under negotiation with Novavax was for 10 million people.

Moon said last week that the government will provide free COVID-19 vaccines to all South Koreans starting next month.

"This deal (under negotiation between SK and Novavax) bears significance, as it not only entails consignment production but also transfer of technology. It will play a big role in advancing the development of our country's (own proprietary) vaccine," Moon said.

"Our own vaccine development is very important in terms of allowing stable inoculation and establishing autonomy (in medical treatment) in case the coronavirus can't be eradicated in a short period of time," Moon said. 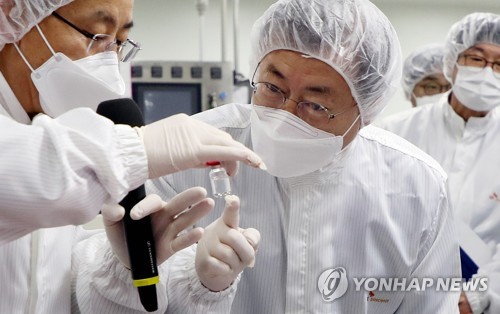 "Researchers, developers and vaccine production workers will become new heroes in the fight to overcome the coronavirus," Moon said.

The country went through two major waves of COVID-19 infections, with the first one centered in the southeastern city of Daegu in February, followed by outbreaks in the greater Seoul area in August. 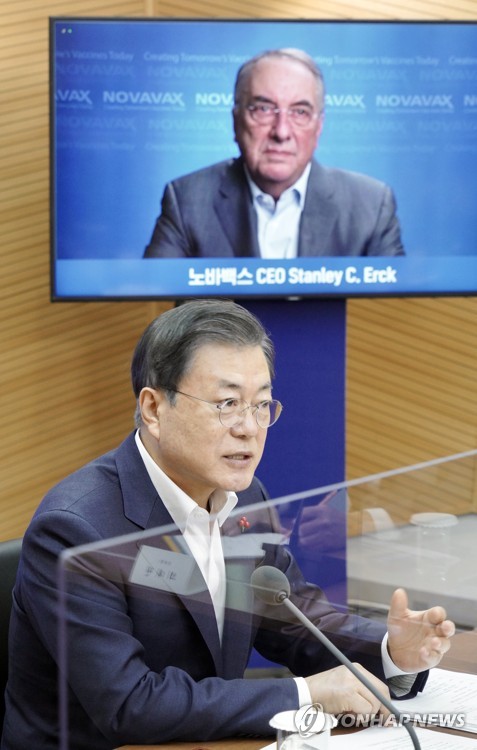 President Moon Jae-in speaks to Stanley Erck, chief of the U.S. drug developer Novavax Inc., via videoconference during a visit to a plant of SK Bioscience Co. in the southeastern city of Andong on Jan. 20, 2021. (Yonhap)