JEJU, South Korea, Jan. 20 (Yonhap) -- One of three alleged co-conspirators in a massive cash theft from a casino on the southern resort island of Jeju has been apprehended, local police said Wednesday.

Jeju's provincial police agency said that a man in his 30s has been detained as a suspect behind the mysterious disappearance of South Korean banknotes worth 14.56 billion won (US$13.38 million) from a casino building at Jeju Shinhwa World, one of the country's largest integrated resorts.

The man has been on the wanted list, together with a 55-year-old Malaysian woman of Chinese descent and a Chinese national, after the theft of the cash, allegedly belonging to Landing International Development Ltd., the Hong Kong-based operator of the Jeju casino, was reported to police on Jan. 4. 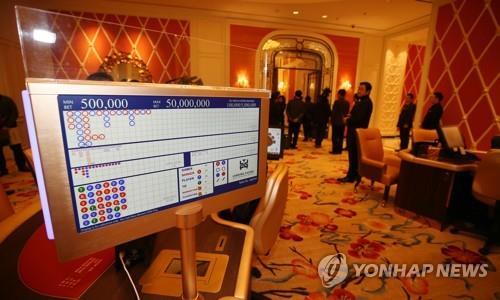 The Malaysian woman, known to be a Landing International executive who was in charge of the missing cash, and the Chinese national are reportedly out of the country, according to police officials.

The Jeju police agency refused to elaborate on the Korean suspect's arrest except to say that he is an employee of an agent company that attracts and manages casino customers.

It also said investigations into the whereabouts of the missing cash are still under way.

The police agency said last week it had discovered about 12 billion won presumed to be part of the stolen money from the Jeju casino's VIP room safe and the Malaysian woman's accommodation on Jeju.