WASHINGTON, Jan. 20 (Yonhap) -- North Korea is and will continue to be a major challenge for the new U.S. administration, but not as great a challenge as other domestic issues such as the pandemic, at least for now, as evidenced by President Joe Biden's inaugural address on Wednesday.

The new U.S. leader took office with a speech that mostly focused on the need for unity among Americans to fight off the deadly new coronavirus, but also other foes facing the U.S. that he said included "anger, resentment, hatred, extremism, lawlessness, violence."

"I was not at all surprised that the Korean Peninsula did not come up in Biden's address," says Celeste Arrington, political science and international affairs professor at George Washington University.

"There was a lot of significant language about unity, tolerance even amid disagreements, respect, facing our national challenges (political and COVID) together, etc. Biden has to prioritize these tough domestic tasks," she added in an email interview with Yonhap News Agency. 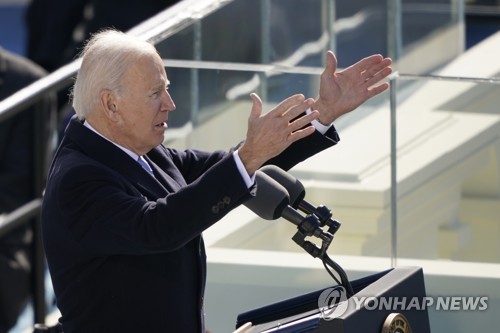 Few had anticipated Biden to directly address North Korea in his inaugural speech, with over 400,000 Americans losing their lives to the novel coronavirus so far.

Still, the experts worried the North may mistakenly choose to return to its old days of "fire and fury."

"Part of Biden's approach to governance will probably be to entrust more tasks to Cabinet members and agencies, more of a 'normal' approach to politics and foreign policy," said Arrington.

"Unfortunately, this way of operating may give incentives for Pyongyang to engage in provocation to re-capture headlines and the president's attention in visible ways," she added.

Bruce Klingner, senior research fellow at the Washington-based Heritage Foundation. agreed the North will likely return to its old tactic of provocation, but argued it would be a mistake if it does.

"If the regime sees a lack of reference to North Korea in the inaugural address as an affront, then it has a very poor understanding of the U.S. inauguration and priorities," he told Yonhap.

"Pyongyang should know that the Biden administration will undergo policy reviews as every administration has done. If the regime undertakes provocative actions prior to the policy review conclusion, then it will trigger a stronger U.S. policy than otherwise might have been the case," added Klingner.

He said foreign issues will come up on Biden's agenda, but "today was not the time to address them."

Biden did, although very briefly, touch on foreign issues, saying he will seek to "repair" America's alliances and global leadership.

"I think this message of repairing alliances bodes well for the ROK," Arrington said, referring to South Korea by its official name, the Republic of Korea.

However, working with allies in dealing with the North Korean nuclear issue may mean a return to working-level talks, instead of high-level summits.

"Pyongyang may not like this approach as much, especially because it will probably be based on more consistent Seoul-Washington coordination and planning," she added.

The denuclearization talks between Washington and Pyongyang have stalled since the second Trump-Kim summit, held in February 2019, ended without a deal, but many argue Trump's top-down approach may have been proven useful in dealing with the North.

North Korea has maintained a self-imposed moratorium on nuclear and long-range missile testing since November 2017 that many believe was partly aimed at fostering conditions for the first-ever U.S.-North Korea summit held the following year. 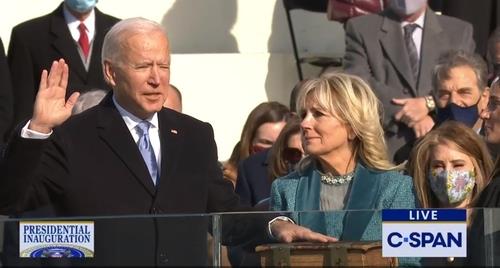 Biden has criticized Trump's meetings with Kim, insisting they have only given Kim what he had long desired -- global recognition -- while making no real progress on the denuclearization of the Korean Peninsula.

Antony Blinken, Biden's secretary of state nominee, on Tuesday said the new administration will have to "review the entire approach and policy" toward North Korea.

In that process, he said, the Biden administration will be looking at what "options" it has to bring North Korea to the negotiating table, "as well as what other diplomatic initiatives may be possible."

Harry Kazianis, senior director of Korean studies at the Center for the National Interest, argued a change in U.S. policy toward North Korea will likely lead to a change in North Korea's behavior, possibly for the worse.

"North Korea will simply go back to the old playbook of the last thirty years -- slowly build up pressure into a crisis that makes Washington take notice," he said.

"If Biden had simply made a short statement in the last several months that he would abide by the Singapore Declaration and try to advance its goals, North Korea would have stood down and likely never showed off its new submarine launched missiles," he added.