"I've been well aware of the hearts of small business owners, who have reached their limits as COVID-19 has lasted for over a year. The four separate extra budgets and the tailored support programs remain insufficient in fully healing the pain," Chung said during an interagency meeting on the COVID-19 response held at the government complex in Seoul.

The prime minister then requested the finance ministry and involved ministries to take legislative steps to address the issue, explaining that the ruling and opposition parties alike have already proposed bills on the issues. 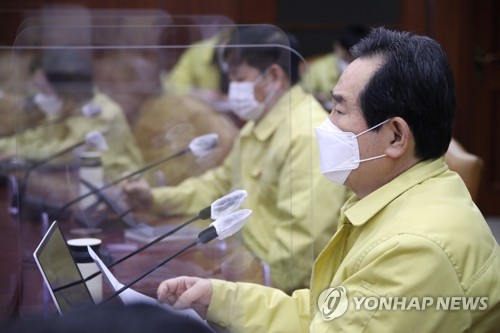 Prime Minister Chung Sye-kyun presides over a meeting of the Central Disaster and Safety Countermeasures Headquarters about measures against the spread of the new coronavirus at the government complex in Seoul on Jan. 21, 2021. (Yonhap)

Chung's comments came as more and more business owners forced to shut down have taken legal action against state measures. Last week, over 300 cafe owners filed a class-action lawsuit against the government, seeking 1.8 billion won (US$1.64 million) in damages for losses caused by the restrictions.

The government has issued several rounds of emergency handouts for small businesses but these are widely seen as insufficient to cover fixed costs, such as rent and salaries for employees.

Chung said he understands the criticism against the government that authorities can no longer force the sacrifices of small business owners by restricting commercial activities for the sake of disease control.

"We need to provide adequate support to those who have failed to carry out proper business due to the government's disease control measures, and now is the time to review institutionalizing such schemes," he said.

More than seven out of every 10 small business owners saw their sales plummet in 2020 from a year earlier as social distancing took a crushing toll on sales of restaurants, cafes and others, according to a recent survey commissioned by the Korea Federation of Micro Enterprise. 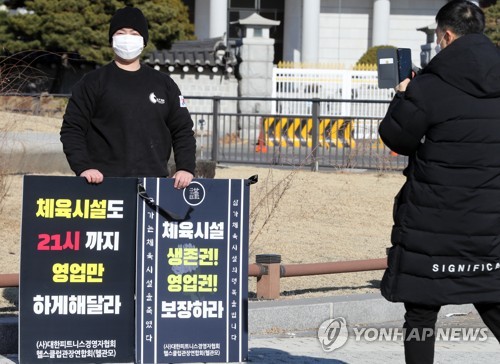 In this file photo, a member of the Korea Fitness Manager Association stages a one-person protest against the government's coronavirus restrictions in front of Cheong Wa Dae on Dec. 20, 2020, demanding sports facilities be allowed to run until 9 p.m. like other facilities including restaurants and cafes. (Yonhap)