In the three-day tracking survey by Realmeter of 1,510 voters nationwide from Monday, Moon's approval rating stood at 43.6 percent, soaring 5.7 percentage points from a week ago.

Moon's approval ratings tallied by Realmeter, which stood at 43.8 percent in late November, had sunk to the 30 percent range until last week amid a resurgence of coronavirus cases across the country and continued instability in the real estate market.

The rate of respondents who gave a negative assessment of Moon's presidency fell 5 percentage points to 52.6 percent. 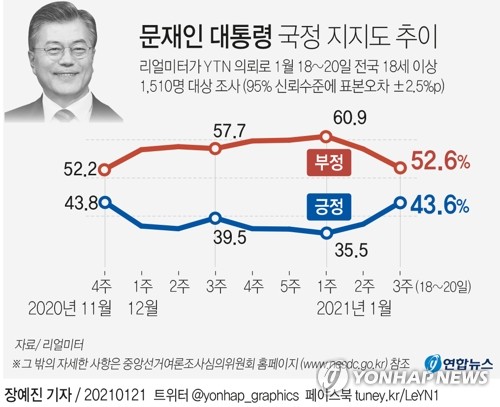 The survey had a confidence level of 95 percent and a margin of error of plus or minus 2.5 percentage points.

Realmeter cited the president's remarks in his New Year's press conference and a Cabinet reshuffle affecting three ministries that took place this week as potential factors behind the rebound in his popularity.

Moon held a a New Year's press conference on Monday and delivered his opinions on politically sensitive topics, such as the debate on granting special pardons to two convicted former presidents, and in other areas such as the denuclearization diplomacy surrounding North Korea and the economy.