SEOUL, Jan. 22 (Yonhap) -- A former official of the ruling Democratic Party was sentenced to two years in prison by a local court on Friday for taking bribes from a key suspect in a massive financial fraud case.

The Seoul Southern District Court also ordered Lee Sang-ho, who formerly headed a Busan chapter of the Democratic Party, to forfeit 30 million won (US$27,230) after convicting him of receiving about 86 million won in political and other funds from Kim Bong-hyun, a prime suspect in the financial fraud case involving Lime Asset Management Co.

Lee was indicted for accepting 56 million won from Kim through his brother's bank account in return for having a cooperative, where he served as an auditor, invest in an investment project managed by Kim. 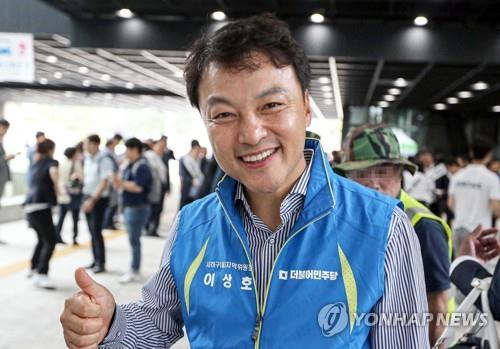 The court said the 30 million won Lee had received from Kim while serving as a political party official should be viewed as political funds, regardless of its purpose.

Regarding Kim's purchase of socks, the court also ruled that Lee appeared to have had financial gains in exchange for unjust solicitations.

Kim, the former chairman of Star Mobility known as the main financial source for Lime Asset, has been under arrest since last April on embezzlement charges. Lime Asset, founded in 2012, has been under probe over its alleged cover-up of massive losses and the subsequent suspension of fund redemption worth an estimated 1.6 trillion won.

In the previous hearing, prosecutors demanded imprisonment of three years and a forfeit of 30 million won for Lee, saying all the money taken by him amounted to political funds.

Lee has denied his charges throughout court hearings, claiming he had just borrowed the money from Kim.