SEOUL, Jan. 22 (Yonhap) -- South Korea should refrain from "prioritizing" a summit between U.S. President Joe Biden and North Korean leader Kim Jong-un when it starts working with the new administration on the stalled nuclear issue, a U.S. expert said Friday.

Michael Green, senior vice president at the Center for Strategic and International Studies (CSIS), made the remark during a virtual forum on the Korea-U.S. alliance, stressing that Biden's team is less likely to respond to such a call, given that it is already loaded with domestic and other issues.

"We have to keep in mind that at higher levels of government, the agenda Joe Biden faces is just massive. Climate change, the pandemic, economic recovery, Russian interference, domestic terrorism in the United States," Green said at the event co-hosted by the CSIS and the Seoul-based Chey Institute for Advanced Studies.

"I hope that Blue House does not go in and prioritize a summit with North Korea, or a big dramatic policy with North Korea because I don't think the Biden administration is prepared to do that," he said, referring to South Korea's presidential office.

Since the Hanoi summit in early 2019 between the U.S. and the North collapsed without a deal, Seoul has been seeking to create fresh opportunities for the resumption of the nuclear dialogue and to kick-start inter-Korean cooperation.

In his congratulatory message to Biden on Thursday, President Moon Jae-in expressed hope for a meeting with Biden in the near future for "candid" dialogue on issues of mutual concern, stressing Seoul's commitment to bilateral coordination for regional peace and prosperity.

Green mentioned that former President Kim Dae-jung tried unsuccessfully to push then U.S. President George W. Bush to have a summit with then the North's leader Kim Jong-il.

But in the case of former President Lee Myung-bak, according to Green, Lee approached Barack Obama with other issues and showed how Korea can cooperate with the U.S. in those areas first.

The expert went on to suggest that the Moon government should show willingness to cooperate with the Biden administration in other areas, such as democracy and COVID-19. 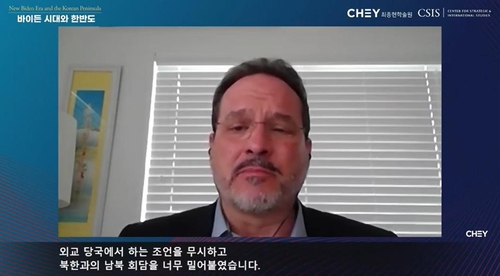