The national flag carrier said it plans to sell 3.3 trillion won (US$3 billion) worth of new stocks, which is higher than the originally planned 2.5 trillion won to finance the acquisition of debt-laden Asiana, due to its soaring stock price.

Korean Air shares have jumped 22 percent this year through Thursday to 33,050 won, far outperforming the broader KOSPI's 10 percent gain during the cited period.

Out of the rights issue proceeds, Korean Air will spend 1.5 trillion won to buy Asiana and use the remaining 1.8 trillion won to pay back its debts, the company said in a regulatory filing. 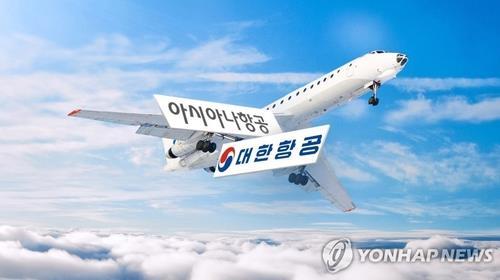 The company has been conducting due diligence on Asiana since December to look into Asiana's cost structure, contracts and other details as it is scheduled to come up with a post-merger integration plan by March 17.

To proceed with the deal, Korean Air submitted documents by Jan. 14 to antitrust authorities in the countries to which the carrier flies for review of the merger.