TOKYO, Jan. 22 (Yonhap) -- The Japanese government will not appeal a Seoul court order to compensate South Korean women who were forced to work in military brothels during World War II, its foreign minister said Friday.

Toshimitsu Motegi made the remarks hours before a midnight deadline to file an appeal against the landmark ruling, which rekindled diplomatic tensions between the two neighbors.

On Jan. 8, the Seoul Central District Court ordered Tokyo to pay financial reparations of 100 million won (US$91,300) each to 12 so-called comfort women, in the country's first ruling of its kind.

The ruling will be finalized at 12 a.m. Saturday if the defendant, the Japanese government, does not appeal by then.

During a press conference, Motegi also said that he would like to reiterate his government's position on the issue, once the ruling is confirmed, without giving more details.

Tokyo has maintained that the case should be dropped based on state immunity, a legal doctrine that allows a state to be immune from a civil suit in foreign courts.

But the Seoul court dismissed the claim, saying it should not apply to "systematic crimes against humanity" and war crimes.

While the ruling has been lauded for bringing some justice -- if belatedly -- to the victims, it is feared to further aggravate bilateral relations between Seoul and Tokyo, which are frayed over thorny issues, including wartime forced labor and Tokyo's export curbs.

Earlier this week, a group of lawmakers of Japan's ruling Liberal Democratic Party demanded the government take stronger action against Seoul over the issue, including taking the case to the International Court of Justice.

Motegi told them the government was considering every possible option. 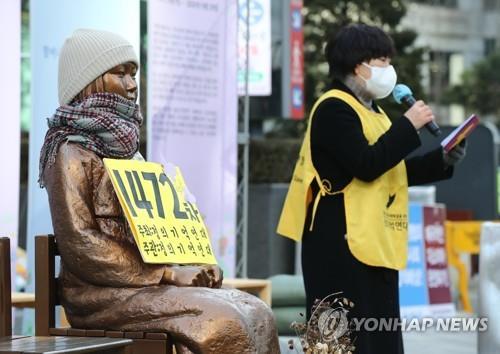