WASHINGTON, Jan. 22 (Yonhap) -- South Korea and the United States must focus on North Korea's consistent pursuit of nuclear weapons, rather than its tactics of diplomacy to either buy time for its weapons development or lessen international pressure, a U.S. intelligence official said Friday.

"There are periods of provocations and coercive behavior, periods where we see missile launches, nuclear tests, conventional shows of force ... And then a shift of periods of engagement of diplomacy to exact concessions, buy time for the program and mitigate pressure," Seiler said in a webinar hosted by the Washington-based Center for Strategic and International Studies think tank.

"What I find with North Korea is strategic continuity, marked by tactical surprise," he added. 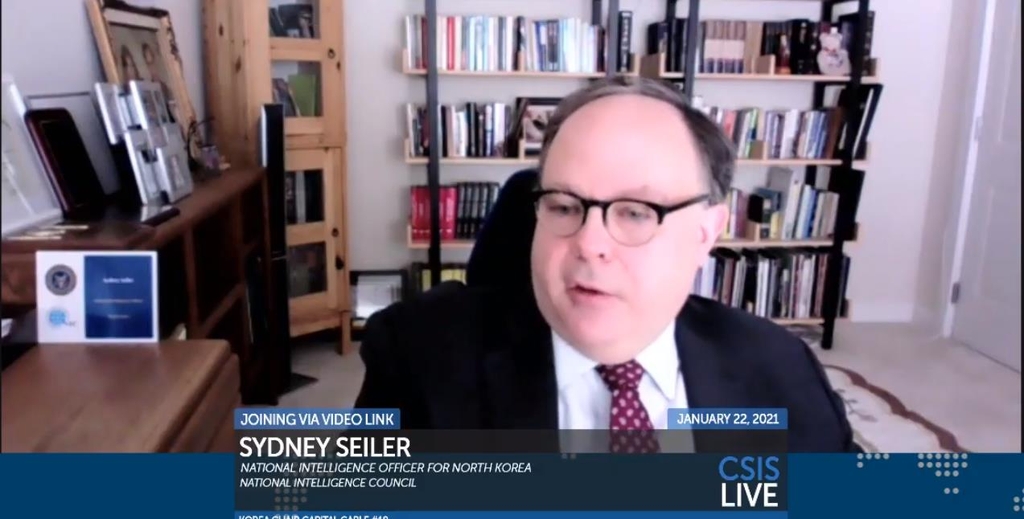 The intelligence official pointed out how North Korea has consistently pursued asymmetrical capabilities for more than three decades.

"The types of provocations and types of engagement can change. They're well choreographed to maximize effect, but at the end of the day, the pursuit of this goal has been consistent for these decades. Every engagement in diplomacy has been designed to further the nuclear program, not to find a way out of the nuclear program and a sustained improvement of relations with either the United States or the Republic of Korea," said Seiler, referring to South Korea by its official name.

North Korea has so far agreed to or signed at least eight denuclearization deals, with the latest such agreement reached by leader Kim Jong-un in his first bilateral summit with former U.S. President Donald Trump, held in Singapore in June 2018.

The country has yet to declare the Singapore declaration void, but Kim has made it clear that his country will continue to develop and expand its nuclear capability.

At the party congress, Kim said the country has successfully developed "tactical" and submarine-launched nuclear weapons.

"What we see in the eighth party congress readout is a strategic snapshot of what we have been seen all along," said Seiler. "It really doesn't give us, you know, extremely helpful insight into what the next provocation is, or what the timing of Kim's next diplomatic outreach reach might be, but we can see in it that the fundamentals of North Korea aren't really changing."

"That should have been clear to everybody in the 2019, 2020 launches that we saw North Korea shift in emphasis," he said, apparently referring to a series of short- and medium-range missile launches staged by the North over the two-year period.

"It is clear that as North Korea develops the capabilities, nuclear capabilities, any delusion in South Korea that the North Korean nuclear program is a US.-DPRK issue should be disappearing," added Seiler, referring to the North by its official name, the Democratic People's Republic of Korea.