During the dialogue, which took place upon Washington's request, the two defense chiefs agreed that the Seoul-Washington alliance is more important than ever and promised to cooperate on improving the relationship, as well as openly communicate on relevant issues.

Suh congratulated Austin on his confirmation and mentioned how he is the right person to take on the duties of a U.S. defense secretary, while Austin mentioned how the Seoul-Washington alliance is a "linchpin" for the peace and stability in Northeast Asia.

The defense chiefs agreed to meet in person in the near future to hold more profound talks on pending issues, the ministry said.

In a release carried on its website, the U.S. Department of Defense said the two defense chiefs reaffirmed the "ironclad U.S.-ROK Alliance and emphasize the importance of close cooperation between the two countries."

It mentioned how Austin "underscored the U.S. commitment to defend the ROK through both the U.S.-ROK combined defense posture and the U.S. extended deterrent."

It added that both sides "noted the need to maintain the readiness of Alliance combined forces, affirmed the importance of maintaining the rules-based international order, and agreed to enhance cooperation on shared threats."

The new U.S. defense chief served in various top posts of the military, including as vice chief of staff of the Army but is said to have had no direct experience with Asia.

Still, he vowed to work closely with U.S. allies, including those in Asia. 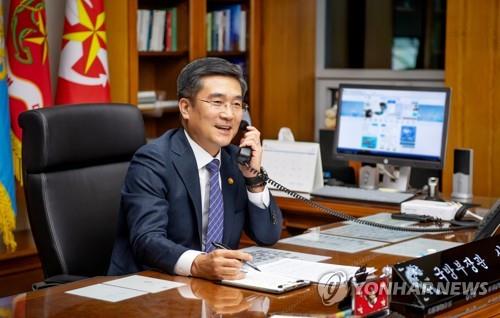