SEOUL, Jan. 25 (Yonhap) -- President Moon Jae-in instructed his government Monday to explore "institutional" ways to compensate the self-employed and owners of small businesses in South Korea for their losses that are attributable to the COVID-19 pandemic.

The call represented Moon's first public message on whether relevant legislation is necessary, which has emerged as a politically hot issue ahead of the April 7 by-election for the mayoralties of Seoul and Busan.

The president called on the government and the ruling Democratic Party (DP) to discuss ways to "institutionalize loss compensation for small business owners and the self-employed within a certain range that (state) finance can afford" in connection with social distancing restrictions. He was speaking in front of pool reporters at the start of a Cheong Wa Dae session to receive briefings from the local health authorities on their 2021 policies. 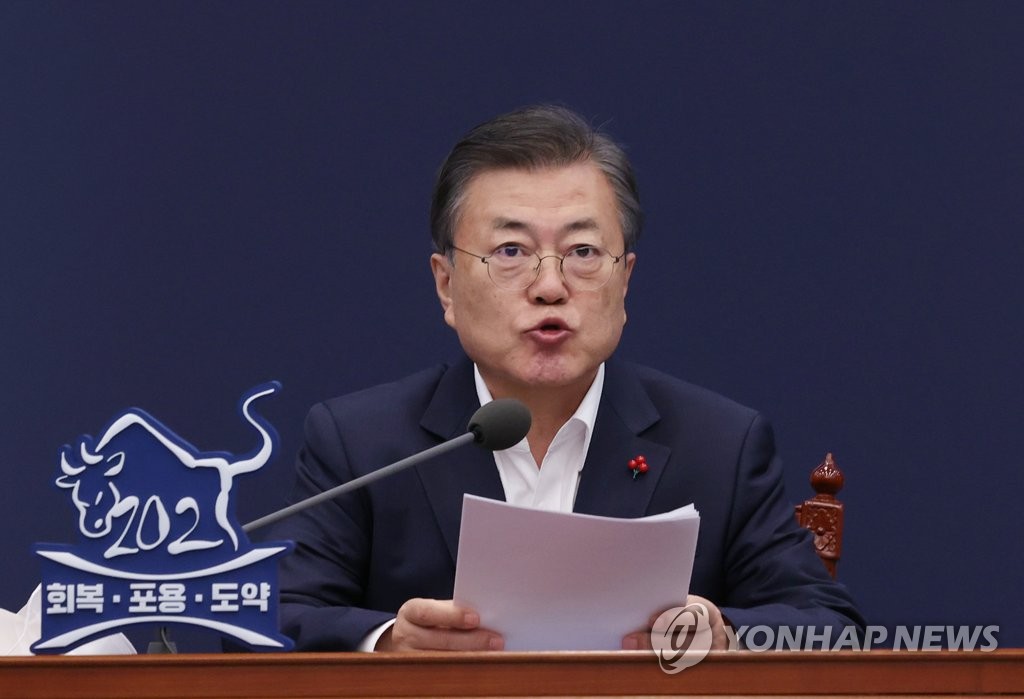 Attendees included top officials from the Ministry of Health and Welfare, the Ministry of Food and Drug Safety and the Korea Disease Control and Prevention Agency, as well as DP leader Lee Nak-yon.

The DP has proposed a set of bills on providing financial support in earnest to those coronavirus-hit small businesses, including cafes and restaurants nationwide, in addition to sporadic emergency cash handouts.

The finance ministry has shown a negative stance toward the move, citing the budget problem.

Critics of the left-leaning Moon administration accused the ruling bloc of attempting once again to use massive budgets for a political purpose in advance of the spring elections.

Regarding the coronavirus vaccination plan, meanwhile, Moon reiterated his expectation that herd immunity would be reached by November at the latest once shots get under way next month, along with the supply of treatment developed by a South Korean drug maker becomes available.