SEOUL, Jan. 26 (Yonhap) -- The South Korean economy's performance was the worst in over two decades last year, bearing the brunt of the pandemic, but it appears to have gotten back on a growth track on the back of a mild recovery in exports, according to the central bank Tuesday.

The country's gross domestic product (GDP) shrank 1 percent in 2020 from a year earlier, according to advance data from the Bank of Korea (BOK).

The figure marks the worst on-year growth since 1998, when the nation's economy contracted 5.1 percent in the aftermath of the Asian financial crisis.

However, it is slightly better than the BOK's projection of a 1.1 percent contraction for last year. 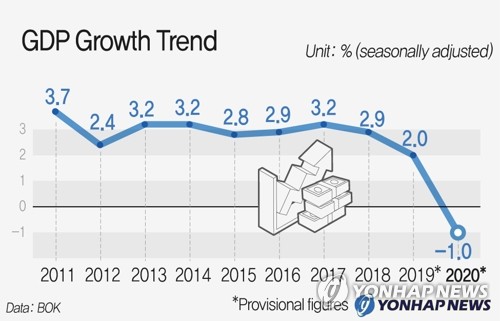 Driven by signs of a modest recovery in exports, the BOK revised up its 2020 economic growth outlook to a 1.1 percent retreat in November last year, compared with a previous forecast of a 1.3 percent contraction.

The BOK expects Asia's fourth-largest economy to grow 3 percent this year, higher than its previous forecast of a 2.8 percent expansion.

In the fourth quarter of last year, the nation's economy grew 1.1 percent, marking an expansion for the second straight quarter.

Finance Minister Hong Nam-ki said the coronavirus-hit economy ended 2020 with a contraction, but a modest recovery in exports paved the way for a recovery for this year.

However, sluggish consumption at home, mainly due to the third wave of coronavirus outbreaks that began in mid-November last year, has undermined prospects of a strong recovery, Hong said in a Facebook post, shortly after the data was released. 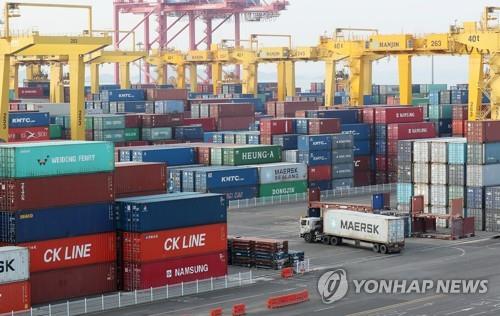 Fiscal spending rose 2.3 percent on quarter in the fourth quarter, making up for shortfalls in other sectors.

Despite signs of a recovery in exports, weaker consumer spending has weighed on employment and put pressure on policymakers.

Earlier this month, South Korea reported the largest job loss in December since 1999 as the pandemic pummeled the job market.

(LEAD) S. Korea's economy contracts 1 pct in 2020 amid pandemic, set to get back on growth track

(LEAD) S. Korea's economy contracts 1 pct in 2020 amid pandemic, set to get back on growth track