SEOUL, Jan. 26 (Yonhap) -- The International Monetary Fund (IMF) on Tuesday revised up its growth outlook for South Korea this year as Asia's fourth-largest economy is faring relatively well amid the pandemic.

The IMF forecast the South Korean economy to grow 3.1 percent this year, compared with its October growth outlook of 2.9 percent.

The IMF's projection is better than 3 percent growth estimate by the Bank of Korea (BOK), Seoul's central bank, but lower than the 3.2 percent growth forecast made by South Korea's finance ministry.

The Korean economy is widely expected to rebound this year on the back of improving exports and a mild recovery in consumer spending following the first contraction since the 1997-98 Asian financial crisis last year.

The Korean economy contracted 1 percent last year as exports and domestic demand were dented by the fallout of the COVID-19 pandemic, the BOK said. But despite the yearly contraction, the economy retreated by the smallest margin among major developed countries.

Based on the IMF's estimate, South Korea's combined economic growth rate is expected to reach 2 percent in 2020-2021, the highest among 11 advanced countries. The organization revised up its 2020 growth estimate for South Korea to a 1.1 percent retreat from a 1.9 percent contraction.

This indicates that the country is expected to recover at a faster pace to the pre-pandemic level on the back of its efforts to stem the spread of COVID-19 and the government's massive fiscal spending.

Last year, South Korea drew up measures worth 310 trillion won (US$280 billion) to prop up the economic slumps caused by the new coronavirus outbreak, including four rounds of extra budgets totaling 67 trillion won.

The IMF also painted a brighter outlook for the global economy this year as economic recovery momentum is expected to gain traction in the second quarter, helped by the rollout of COVID-19 vaccines and treatments.

The global economy is forecast to grow 5.5 percent this year, up from the IMF's previous projection of 5.2 percent. The Washington-based organization said the world economy is estimated to have contracted 3.5 percent last year. 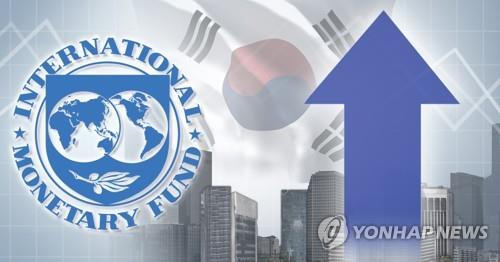